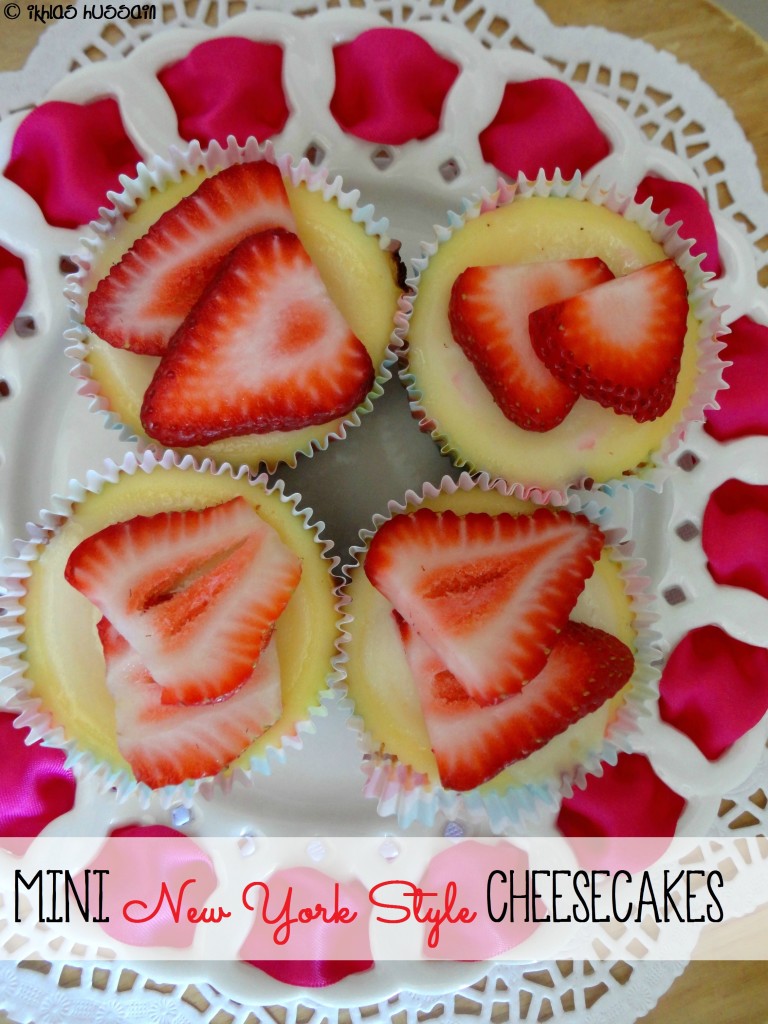 Is there anything better than cheesecake? If you say yes, our friendship may be over…

Seriously though, I don’t think there’s anything I love more than a large slice of New York Style Cheesecake, piled high with strawberries and with a cold spurt of whipped cream on the side. You just can’t beat it!

Instead of making a big cheesecake, I decided to make mini cupcake style cheesecakes, because is there anything better than mini dessert?! Nope! 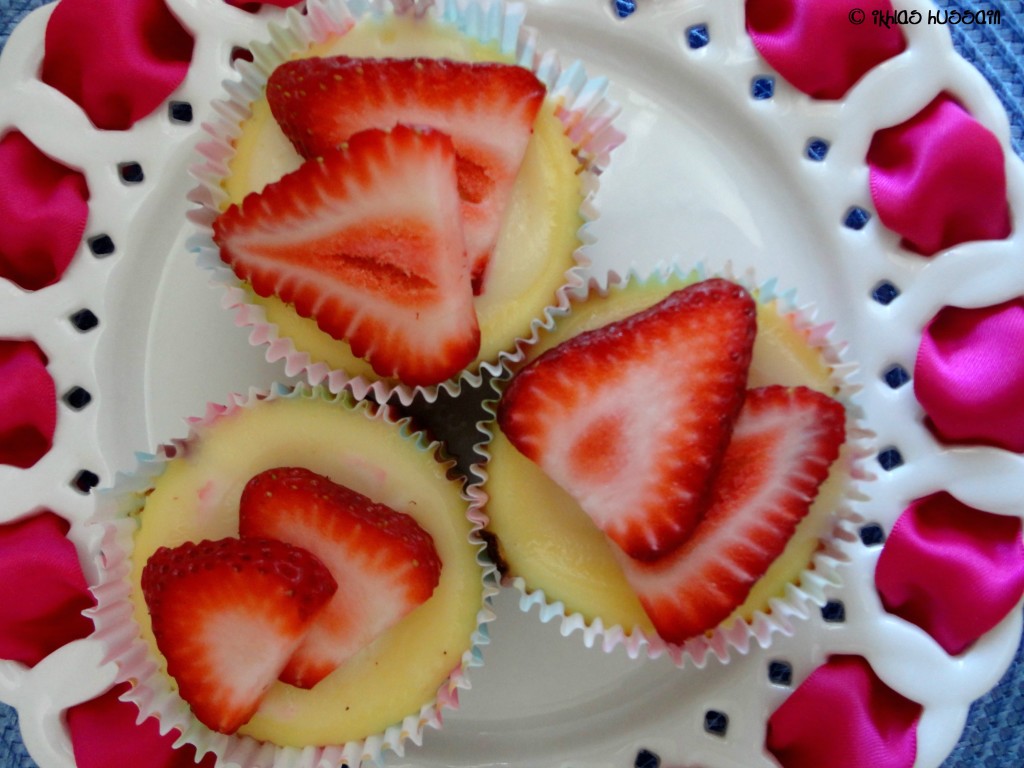 I made this for my cousin’s dholki a few weekends ago, in addition to the Chocolate Buttermilk Cupcakes with Salted Caramel Frosting. I loved both equally (I can’t choose!), but these guys were gone within five minutes of my aunt setting them out in front of the guests. I had to quickly grab one for my mom before they all finished! They were SO good and I got so many reviews from my aunt’s friends and relatives afterwards. 😀

I’ve never experimented much with cheesecake recipes. My mom has one that she’s been using for years, and which I’ve taken. It’s the same one I used for my New York Cheesecake  last year (with the horrible picture). It features pretty much standard cheesecake ingredients, graham cracker crumbs, butter, brick cream cheese, egg, and vanilla. Except this cheesecake has sour cream both inside and outside the cheesecake. Not many cheesecake recipes include sour cream, but this is what makes all the difference for me. 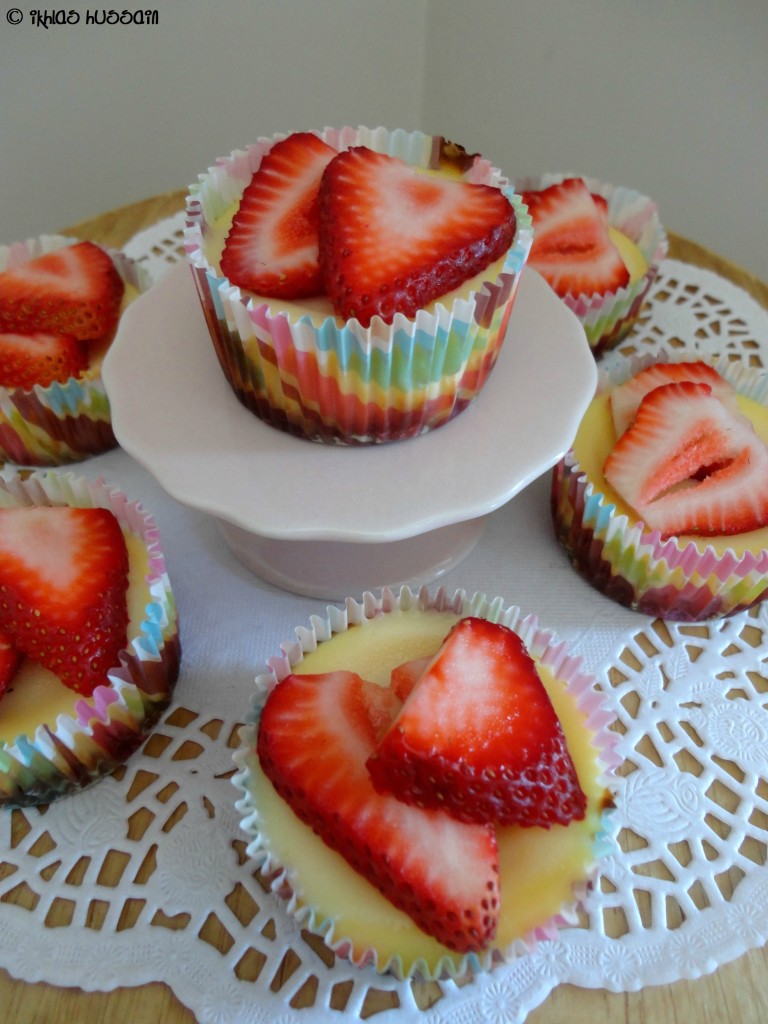 Tangy, yet sweet, the sour cream makes the filling smooth and luscious. I also top them with a sour cream topping (sour cream mixed with sugar) when they’re almost done, and then pop them back in the oven to bake the topping on. It’s a simple topping, but for some reason, it heightens the tangy, yet sweet taste of the cheesecake.

I also like a thicker crust, so I used more graham cracker crumbs than other cheesecake cupcake recipes I looked at. The combination of the buttery crust with the luscious, creamy filling is what makes cheesecake such a popular dessert. SO so good! 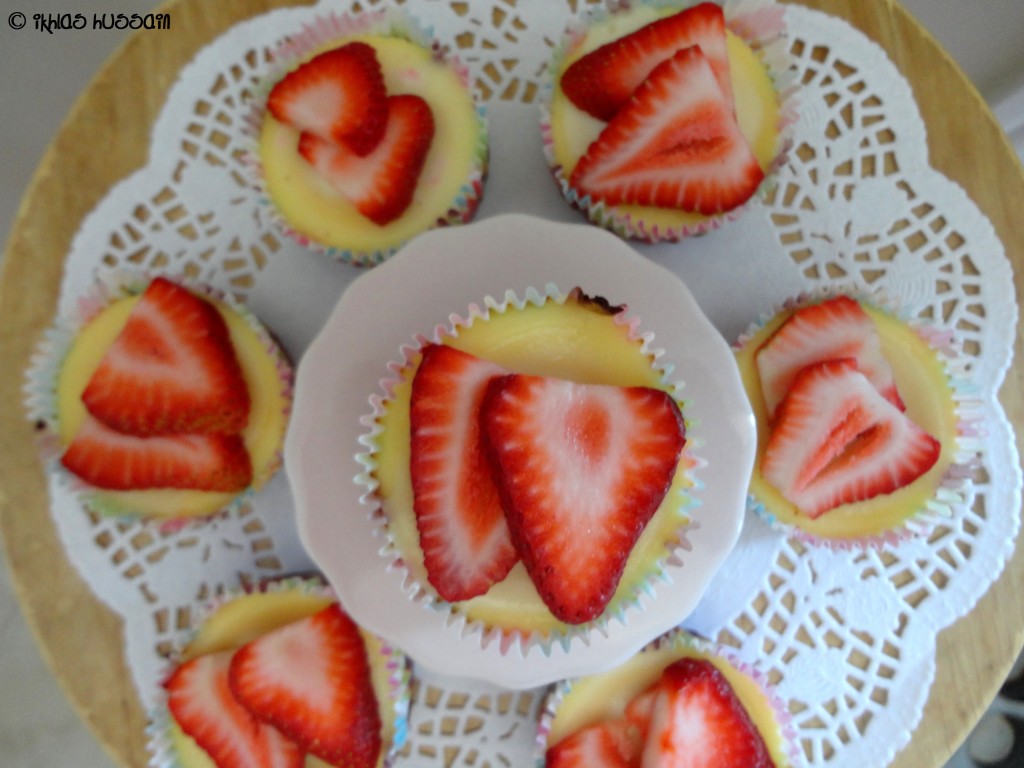 Instead of babbling on any longer, I’m going to just shut up and share the recipe with you guys, because you seriously need to make it! You don’t need it to be a special occasion or event; make them for yourself and enjoy! 🙂

One of the things I love about this recipe is that it’s really easy to make. It’s not time-intensive nor is it complicated. Even though it doesn’t take long to assemble, when it comes out of the oven and when it’s dressed up, it’s a showstopper dessert. 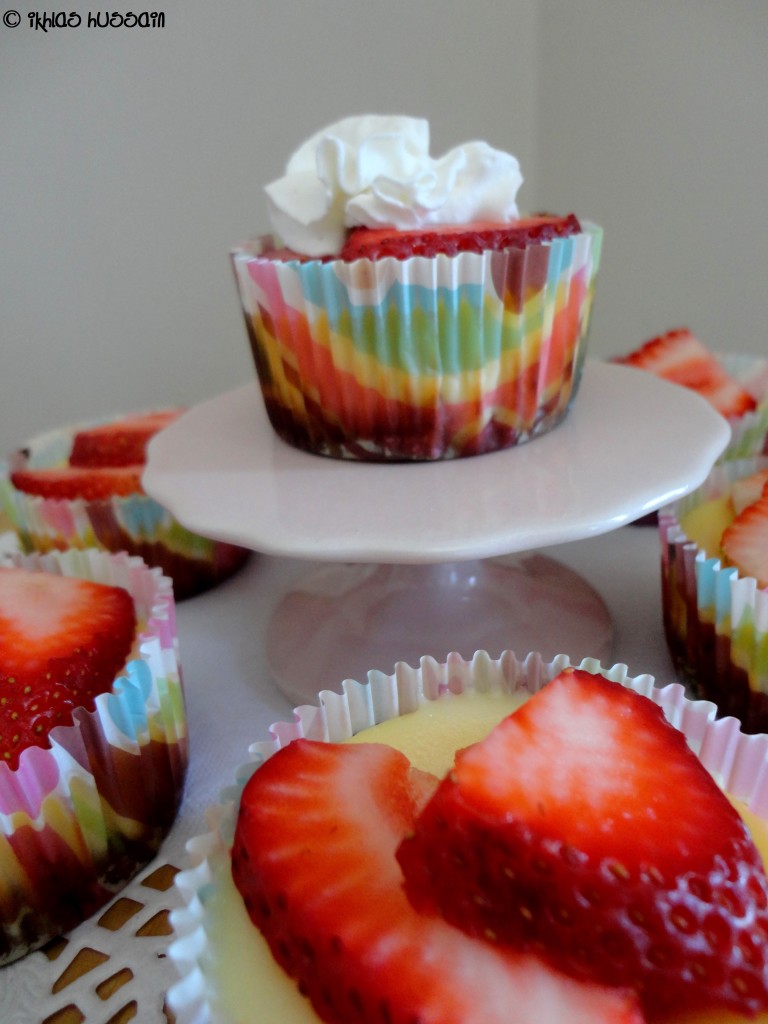 Normally when making the crust of cheesecake or anything else with a graham cracker crust, I use a spatula to press down the crust so that it firms up. I couldn’t fit a spatula into the cupcake tins, so I used the bottom of a small glass instead to press down on the crust and it worked beautifully.

Something else I want to highlight is the refrigerating time. In order for the filling to set nicely and not stick to the liners, they need to be refrigerated for awhile. Four hours is the minimum, but I like making mine the day before and letting them stay in the fridge overnight. This allows you to have nicely firmed up cheesecakes, without the filling not being set. 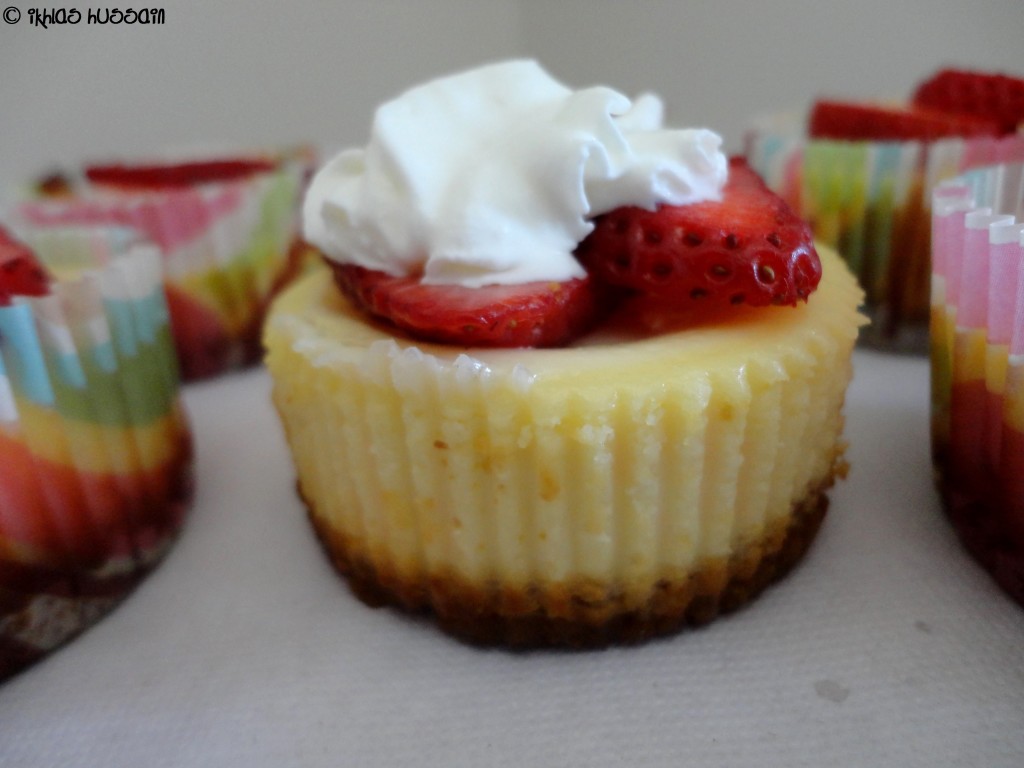 What’s best about making the Cheesecake in mini form is that you can have more than one without feeling too guilty, because, hey, they’re mini! 😀 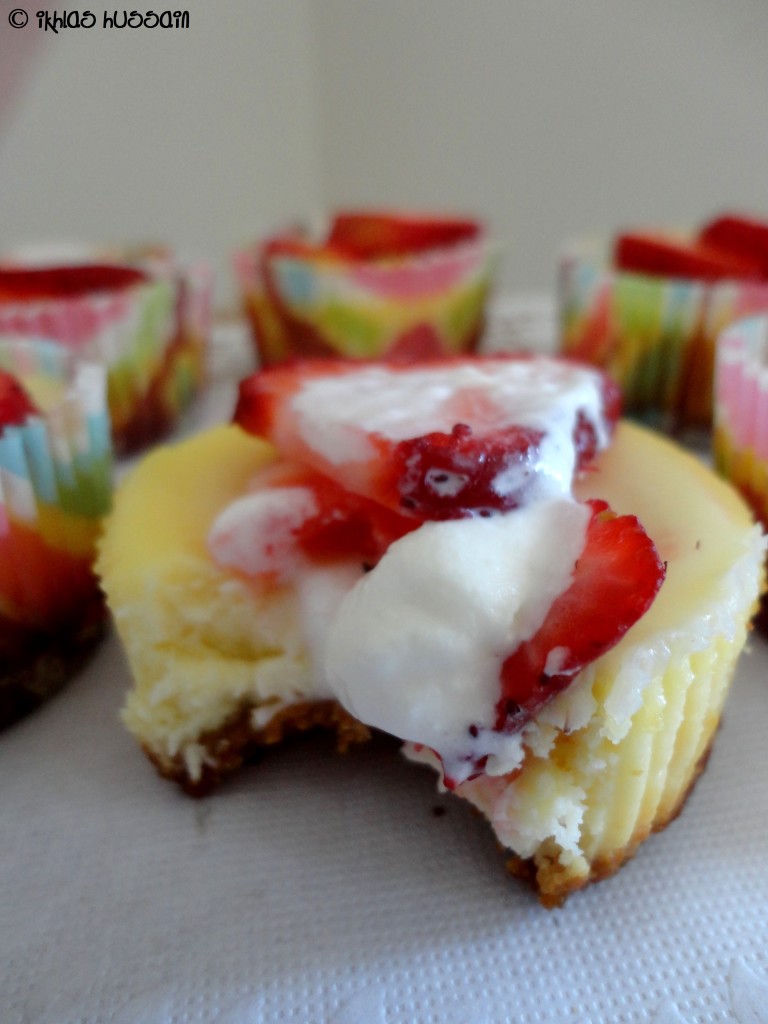 I really hope you guys try this recipe out…it’s one of my absolute favourites and perfect for the summer. 🙂