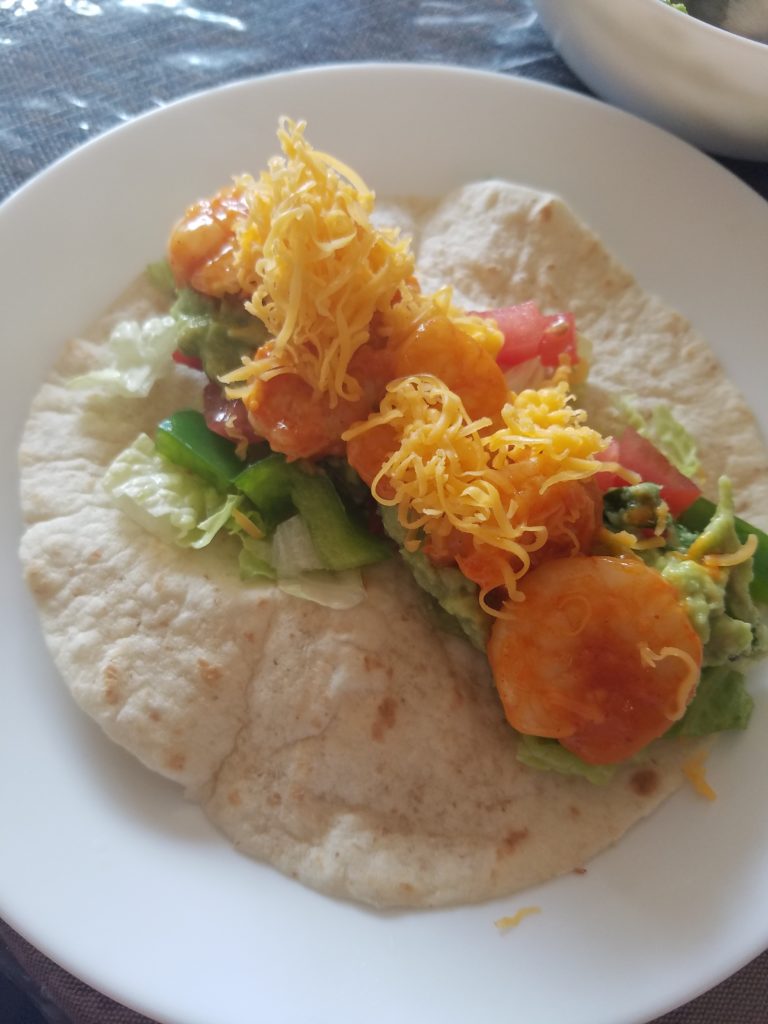 I might have mentioned this already, but I’ve had no cravings during the entire duration of my pregnancy. I’ve still got 2 months to go technically, but I figure if they haven’t shown up during the last 7 months, it’s unlikely for them to show up now…

Maybe this is because I used to have cravings even before I was pregnant? I’ve had a love affair with food ever since I can remember and I’ve never needed an excuse to say “I’m craving this…” So maybe that’s why I never noticed my cravings as being unusual during pregnancy?

So first of all, excuse the unprofessional picture. I currently don’t have access to all my blogging and photography stuff. So I just snapped a quick picture of this taco yesterday before literally stuffing it in my face and decided to share it with you all since it’s been awhile.

I usually make these with chicken, but was craving some scrumptious shrimp yesterday. But you could also easily make these with boneless chicken. Just be sure to cut up the pieces of chicken into small, bite-sized pieces before marinating them so that they’re easy to put into the taco shells.

I love these tacos because I always have the tandoori masala or seasoning at home. It’s pretty much a staple in most Pakistani households, but if you don’t have it, you can easily grab it from the international aisle of most major grocery stores. The brand that’s most easily accessible is Shan but if you can’t find that, feel free to use any other brand. Marinating the shrimp in tandoori masala adds a nice kick to the tacos; the guacamole usually tends to cool the taco down so feel free to add as much as you want. Now let’s get to the recipe!

For the Shrimp:
For the guacamole
Veggies
Additional items

What I love about tacos is the fact that there’s not much you have to cook. There’s just a lot of cutting and prep involved, but if you plan on having these for dinner one night, you can cut all the veggies beforehand to get all the prep done. The guacamole usually has to be made right before eating because it browns quickly, but otherwise it isn’t much work. Even if you use raw shrimp, they take about five minutes to cook, so there’s not a lot of time spent waiting by the stove.

You can also easily add more or less veggies, depending on your taste and preference. Tacos are so versatile because you can make them how you like it! Also, they make great leftovers 🙂

If you haven’t worked with Shan tandoori masala before, a good tip is to go by the colour of the seasoning. If you’re not too sure how spicy you want it, err on the side of caution and add less (about one teaspoon). Your shrimp will be slightly pink and not the bright red if you add two or more teaspoons.

Spicy, but light and fresh, these Shrimp Tandoori Tacos are just what the doctor ordered! Try these easy tandoori tacos for your next taco night!