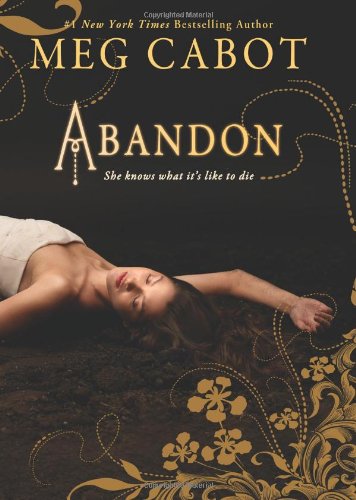 When Abandon first came out, I was super excited to read it, especially since I heard Meg Cabot talking about it on her blog. And you all know how much I love Meg Cabot, riiiight? Hahaha.

Abandon tells the story of 17 year old Pierce and her life after returning from the ‘dead’, essentially meaning that she was held captive in the Underworld before she was revived by doctors. Its a retelling of the Greek myth of Persephone, who gets taken into the Underworld by the Greek god Hades. I love Greek myths and I love retellings of any sort, so I thought this was a sure win.

But my friend Chelsey didn’t like it so much, which piqued by curiosity even more. This week, I finally had the time to read it.

This biggest problem: Abandon has no plot. Absolutely none. Zilch. The story is set up in a way to show Pierce going forward, after this traumatic experience she had. And this includes not only her dying, but her day in the Underworld, which she spent with John Hayden. For something so intriguing about the story, Cabot does not include the Underworld scene in the book. Oh sure, she flashes back. But the book starts off with her adjusting to life after being dying and being brought back to life. Which happened 2 years ago.

There’s way too much distance from this central event to make the story credible, or make Pierce’s emotions understandable. What’s more, John Hayden is completely unrelatable. He is an archetypal Edward, completely with hostility and scorching good looks. But what he’s lacking is a personality. Its like Cabot just took the archetype and inserted John Hayden into it, adjusting a few things and oh…making him the god of the Underworld.

There are also some secondary characters and secondary plot lines introduced into the story which hint at potential, but they’re never explored. Pierce’s cousin and her classmates and the the tension between them is something that sounded like it was going to feature prominently in the book, but before anything had happened, it was over before anything had really happened.

I get that this is the first book in a series, but there were just too many questions left hanging at the end of the book, and not in a good way. More in a I-don’t-get-it way. The ending was just a big WHAT moment, since it made ABSOLUTELY NO SENSE. In addition, Pierce suddenly ‘realises’ she’s in love with John, but as readers we don’t really get to see how and why that happens. Sure, he’s hot and broody, but does he even have a personality?!

Don’t get me wrong, it was a fun read. Mostly because I kept waiting for the real story to start, and the back story to go into the back. But then as I turned onto the last page, I realised all the back story was the story.

I used to be a big fan of Meg Cabot’s books, but the last two (Abandon and Overbite), haven’t been her greatest, so I’m starting to doubt her.