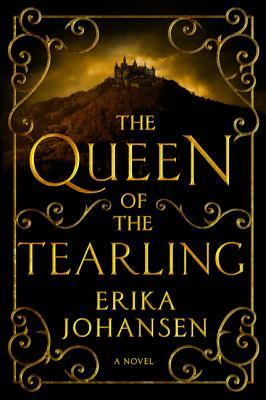 Princess Kelsea Raleigh has grown up in a small cottage on the outskirts of her kingdom her whole life, sheltered by her foster parents after the murder of her mother. But at 19, Kelsea is taken by the Queen’s Guard, who arrives on her doorstep to return her to her throne.

And so Kelsea begins the perilous journey back to her kingdom, a journey that is fraught with surprise attacks and tests. But when Kelsea returns to the capital , she discovers that her Uncle, the Regent of the Tearling, has been slowly destroying her kingdom and that her people live in daily fear of an invasion from the deadly Red Queen.

Thrown into a world where people look to her for guidance, where enemies linger everywhere, and where an invasion by a queen possessed by the darkest magic lingers on the horizon, Kelsea struggles to become Queen of the Tearling.

This is a tough review to write. Part of me really enjoyed it, and part of me struggled with a lot of it.

Some of you might have heard of Queen of the Tearling prior to reading my review, most probably from hearing about it in the news. Why has this book been in the news, some of you ask? Because, even before Queen of the Tearling was published, it was optioned and sold for movie rights and had the name of Emma Watson attached to it as the title character. Books get made into movies all the time, but how many books get optioned even before they’ve been published? And have names like Emma Watson attached to them?!

I think my problem with this book begins here. It was hyped up even before I had a chance to get it. Back in January or February, several months before the book was even released, Queen of the Tearling was setting the media ablaze. Apparently it was so good that a movie just had to be made, and with none other than Emma Watson herself!

Excuse my sarcasm, but that’s a pretty tall order. But I ignored my skepticism and eagerly awaited the arrival of the book, like so many people around the world. And a part of me knew that there was just no way it would live up to the hype that it had built up around itself. But I dove in anyways.

With that being said, Queen of the Tearling is not a bad book. It’s a highly enjoyable fantasy novel, with a strong heroine, and a cast of complex, interesting characters. But I think why I didn’t enjoy it as much as I’d wanted to was because I kept expecting something spectacular. And spectacular this book was not.

But let’s start with the good stuff, as always! I loved the world-building in the novel. Johansen has created an intricate world, with a rich, detailed history, that feeds into everything that happens in the story. There are parts of the story that are consciously left blank for the purpose of keeping Kelsea in the dark, and it’s interesting to watch how Kelsea navigates around them.

The cast of characters are similarly rich and have detailed back stories, from Lazarus Mace, Kelsea’s main Queen’s Guard, to Fetch, a mysterious Robin Hood-esque thief, to the Red Queen, the most fascinating of them all, an evil, yet complex woman with motives yet unknown. Johansen doesn’t just keep the story focused on Kelsea, which was something else I appreciated, but shares her narrative with her large cast of characters, giving them their time to tell their stories. I loved learning about some of the side characters this way, because it made me understand them and their motives better.

You might notice that the books titular character, Queen Kelsea, doesn’t make my list of favourite characters. That’s because I have mixed feelings about her. I started off the book really liking her. She was a regular girl, responding to the decisions being thrust upon her. She travelled with a group of men throughout the land who believed her weak-minded and similar to her mother. She responded well. But as the store continued, I found that there was distance between myself and her, and that I couldn’t really relate to her as much as I had been able to in the beginning. She seemed so queenly all of a sudden, and gone was the girl who was uncertain and a bit wary of the world. All of a sudden she had grown up and was this stately queen. I didn’t really see any of her insecurities or worries anymore, since it was like she had donned this mask of professionalism in front of everyone, even the reader.

On another note, while I really enjoyed the world-building of Queen of the Tearling, there was one big aspect that was a major flaw in the story: timing. It is unclear, in the beginning at least, when or where the story takes place. We are led to believe (or at least I thought so), that the story is fantasy and so takes place in an alternate universe. So when I began reading references of ‘New London’, America, JK Rowling, and The Hobbit, I was so confused. A quick search on Goodreads told me that apparently the story takes place in a post-apocalyptic future . I definitely didn’t get this from the story, and remained confused about the timing of everything throughout.

With that being said, I didn’t hate Queen of the Tearling; it had an interesting plot, was well-written, and had a lot of great ideas. But I feel like the potential of it was so much more than it actually was, and there were just a few glaring things in the story that prevented me from truly loving it.

Whew that was a long review! I think it’s been awhile since I’ve had so much to say about a book, but this one definitely deserved. If you’ve read it, what did you think?