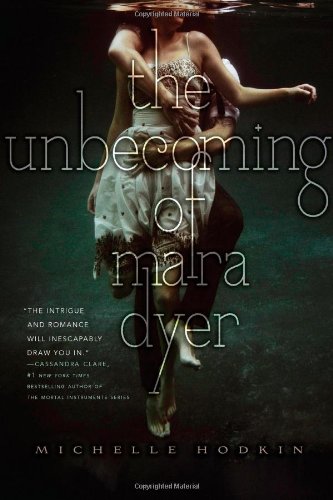 Who is Mara Dyer? She’s a 17 year old girl who’s been in an accident. Her friends died. She lived. And she doesn’t remember any of it.

Thus begins the journey of Mara Dyer to remember exactly what happened that night, when her and friends went to the falling-down asylum and how she survived. She’s been diagnosed with PSTD by the time her and family move to Florida. She thinks things will be normal now. They aren’t.

Things start going strange from the beginning. People start dying. Mara sees people that aren’t there. Or are they?

As her whole life threatens to fall apart around her, Mara falls in love. With the wrong guy. But even a boy isn’t enough to distract Mara from the realisation of it all. Is Mara criminally insane? Or just insane?

Who exactly is Mara Dyer?

So I’ve blabbed about this book a lot now; you must be sick of it. But I can’t help it. I love it.

The Unbecoming of Mara Dyer is creepy and dark and strange. Best part? Its meant to be like that.

Mara is a strange character; one minute you think you trust her, and the next she says or does something that makes you question everything up till that point. You could write an essay on this book on the topic of ‘unreliable narrators’.

Debut author Michelle Hodkin weaves a tale of murder and suspense, as she tells the story through Mara, who may or may not be going crazy. The world is described so expertly through her eyes that you get confused about what you just read, and wonder whether you did read it, or skipped a scene. Things don’t always add up. And that’s how its supposed to be.

The first time I read this book, I couldn’t stop. And I couldn’t this time either. Reading it at night, during a storm (as I have for the past few days) is the best way to read this book. It’ll give you goosebumps and leave you with such cliffhangers that make you want to leap into the next chapter.

Mara’s family is surprisingly very present in this book. In a lot of YA novels of late, the teen girl’s family is superfluous and almost doesn’t exist. Except for the one family member or members (the parents) who cause the protagonist angst. And while Mara’s mother stresses her out, her family is also the source of her comfort and her sanity. A lot of small, informative details are provided about each family member (almost all the characters) so that you feel like they’re real people. No matter their importance in the story.

I was especially intrigued by the fact that Mara’s mother is Indian. I really can’t wait to see how and if Mara’s mother’s family and culture play an impact on the larger story.

While I absolutely loved this book and couldn’t put it down, there are a few things that kept niggling at me once I’d finished.

After Noah becomes a main character in the story (in a bigger way than before), other characters/problems sort of disappear. This makes sense, I suppose, considering that this is written from an unstable, besotted teen. But what happens with Jamie? After being the cause of his expulsion, Mara doesn’t mention him or spare him another thought again.

Also, whatever happened with Mara failing Spanish? This point was stressed on so deeply and it also becomes the source of one of Mara’s breakdowns. She stresses about what her parents are going to do in that moment, and yet she doesn’t ever spare it another thought. Granted, another big event happens right after, so it might be why she forgets about it, but it could have been mentioned again.

Again, these slips might have been intentional. Who knows with Mara?

And while I loved the first half of the book (the questions, the suspense, the creepiness of it all!), the second half wasn’t my favourite. As soon as Noah became more prominent, everything else falls away, and the creepiness factor sort of melts away as the story becomes more about the romance. Don’t get me wrong, I am not against romance. If you know me at all, you know I love a good love story. But I just wish the elements from the first half of the story continued.

But just as I’m missing the creepy factor, by the end, Hodkin throws a monkey wrench into the plot, right in the last chapter and the whole thing blows up in your face.

If you haven’t been convinced by now to read this book, you must be crazy. So go now, before Mara includes you in her body count.