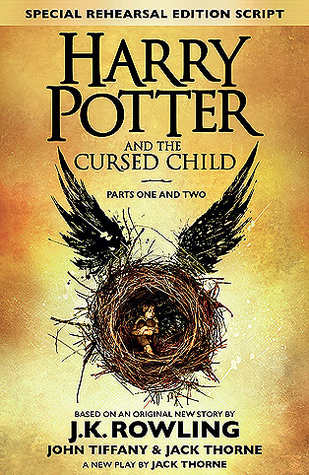 This is a review that’s been simmering for a few days. It’s also a review that will be filled with spoilers, so if you haven’t read the book yet and you’re planning to, avoid this review!

As a huge fan of the series since childhood, I received the news of The Cursed Child with mixed feelings. On one hand, it’s like a fan’s dream come true, but on the other hand, there’s a lot that’s different about it. First of all, it’s not a novel. It’s a script. This makes a huge difference. It’s also not only written by JK Rowling, but by a team of writers. Again, there’s some Rowling-esque flavour there to convince you this is Harry Potter but there’s also two other writers as well.

I did enjoy parts of the book/script. There were parts that reminded me of the magic of the original trio of Harry, Ron, and Hermione, especially the friendship between Albus and Scorpius.

But for the most part, the script felt a lot like fanfiction. There were parts that felt completely ridiculous. The biggest thing that comes to mind was Voldemort having a daughter. It was so out of left field and random that it felt like a big joke. It was something that was mentioned throughout the book, only to be revealed that Delphi, a character that was part of the story in the beginning, was the daughter.

Throughout the book, Harry keeps talking about how he keeps feeling a darkness near him. His scar has been hurting him on and off, which in itself makes no sense, because the last few words at the end of book 7 were about how his scar hadn’t hurt him anymore. But it’s also weird how Delphi is the one who is triggering his scar hurting, because it means that she’s inherited her father’s evil. The whole Delphi as Voldemort’s daughter was just messed up.

Another thing that felt ridiculous was Ron. I know Ron is a complex character, but throughout the series, and especially the 7th book, he really grows and matures. But in this book, Ron was a big fat joke. He’s an awful husband and father, and a big joker all around. I couldn’t take him seriously in any scene he was in; plus him and Hermione’s relationship seemed like it was about to fall apart. I have no idea what happened to him in 19 years, but he was a caricature of the original Ron and it was painful to read about.

The time turner was another plot device that was extremely weird. It’s a device that was used quite carefully and deliberately by Hermione when it was first introduced, and also by Jo when she was writing about it. If everyone had access to time turners in the way that Albus and Scorpius did, wouldn’t they just go back all the time, and do whatever it was they wanted? Again, it made no sense.

Overall, the story felt way too ridiculous and random to be taken seriously. I know Jo had a hand in creating it, but at times, it really didn’t seem that way. It was as if other writers had written a story of what they thought could happen 19 years after the 7th book, and that’s what was cobbled together.

I know it’s supposed to be canon, but I don’t know if I can accept it. I’m just going to pretend that the series ended with book 7. I don’t think I’ll be the only one…

I have no idea what to rate this. There’s still a sense of loyalty I have to the book because it has some of my favourite characters of all time, but it’s like they were morphed into different people. I almost wish I could take back reading it.