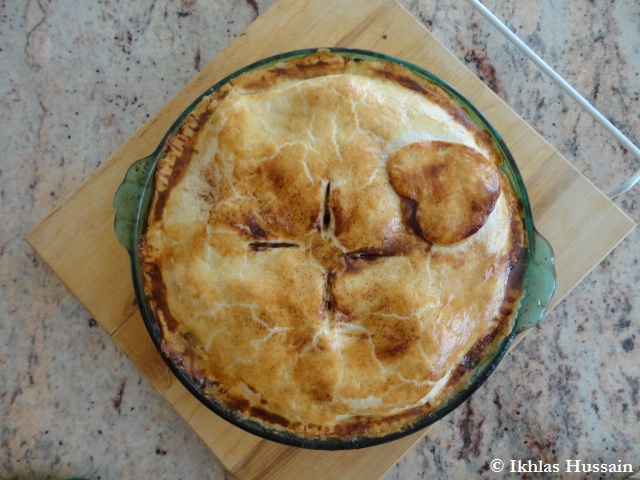 So it was Thanksgiving in Canada this past weekend. I don’t technically celebrate Thanksgiving in the traditional sense, since I’m brown and my dad’s typical response is, “You should give thanks every day, not just one day of the year!” Can you guess what he says on mother’s day and father’s day? Lol.

Regardless of this, I always seem to start craving all the comfort foods that the cooler weather brings, like pot pies, regular pies, and crumbles. I’m actually not a big fan of pumpkin, even though it seems to be all the rage this season; instead, apple is my go-to fruit in this season.

And so when I had a hankering for an AMAZING apple pie, with a crispy, buttery crust and an ooey-gooey filling, I started scouring the internet for the perfect recipe, one that I could see myself making for years. This ended up taking longer than I anticipated since apparently there are a gazillion ways to make this thing! Some used sour cream in the dough, some used shortening instead of butter, some people commanded you to use Granny Smith apples, and those only, while some recommended a mix of everything under the sun, and then others used cornstarch, while others used flour. It was enough to make my head spin!

I ended up comparing three recipes to get the perfect golden apple pie, and ended up baking two pies (it was research’s sake, of course), so that I could present to you the perfect (in my opinion) apple pie. 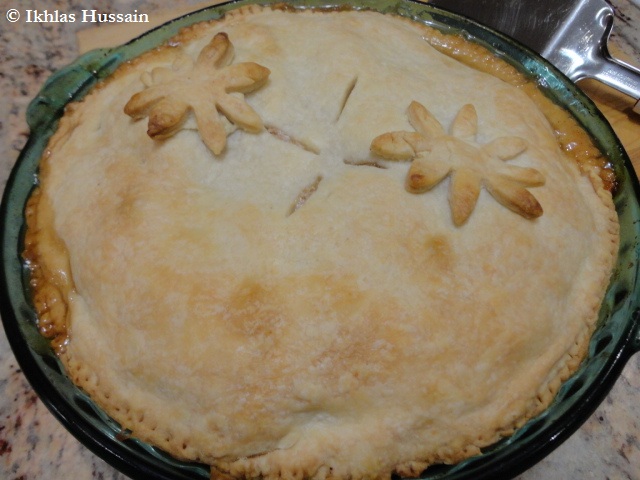 Filling Ingredients:
As inspired by Moms Who Think and Kraft Kitchens 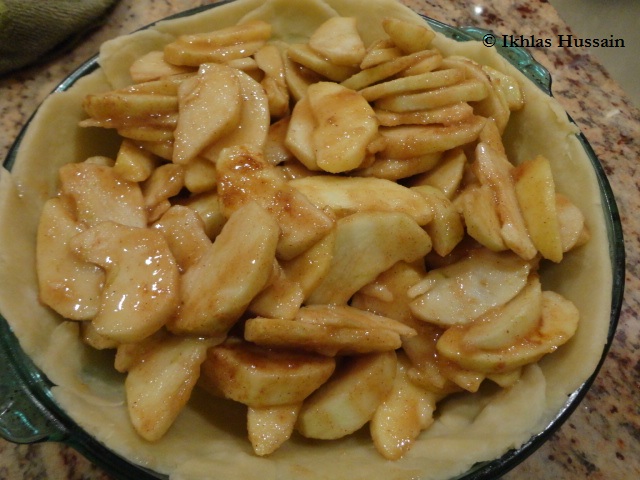 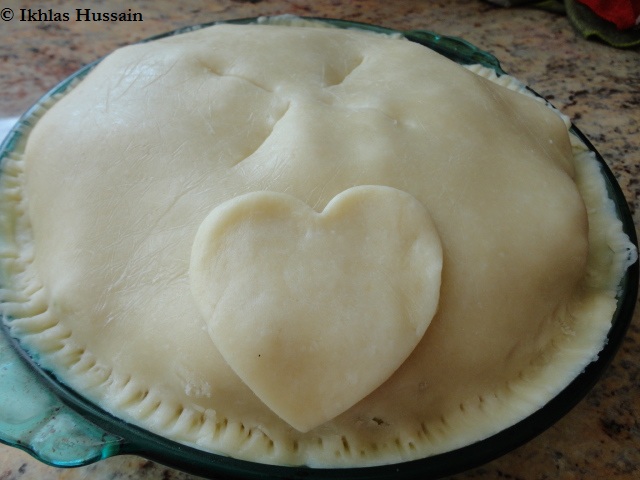 *A note about the apples: So when I was planning this recipe, I specifically told my dad to buy Granny Smith apples, since that’s what the majority of all recipes called for. As usual, in typical dad fashion, he bought me some other apples which were not tart Granny Smiths. After I had a bit of a tantrum, I ended up using these other sweet apples (Spartan), and even one Royal Gala, since I didn’t have enough. The result was amazing.

The second time I made the exact same recipe, except this time got Granny Smiths. The result was a bit tart and sour, which my family still enjoyed, but I wasn’t such a big fan of. So the moral of the story is: use whichever apples you like! Tart Granny Smiths aren’t the be all, end all for apple pie filling, since I actually enjoyed my pie more with sweeter apples. 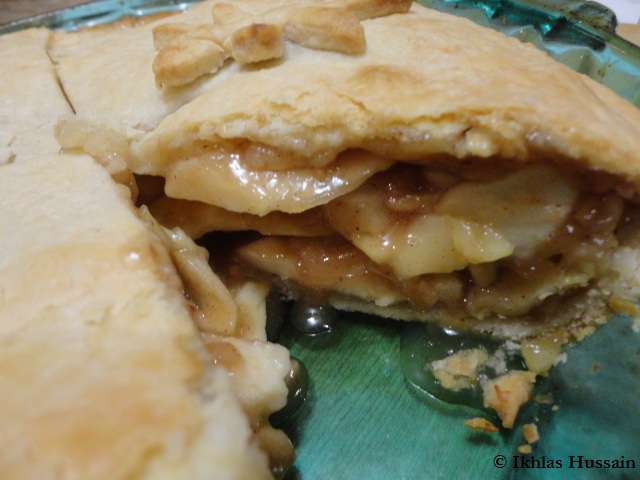 Whew! This took me awhile to write (and to make), but honestly, it’s not a hard recipe, just one that requires a lot of steps. That’s why it’s easier to break it down into chunks. I made the dough in the morning, and then started assembling at night.

Another tip: don’t start assembling your filling until your dough is almost ready to be rolled out. The first time I made the pie, I didn’t give myself enough time, and was sitting with my filling, still waiting for the dough to soften enough to roll out. So give yourself lots of time during the preparation. 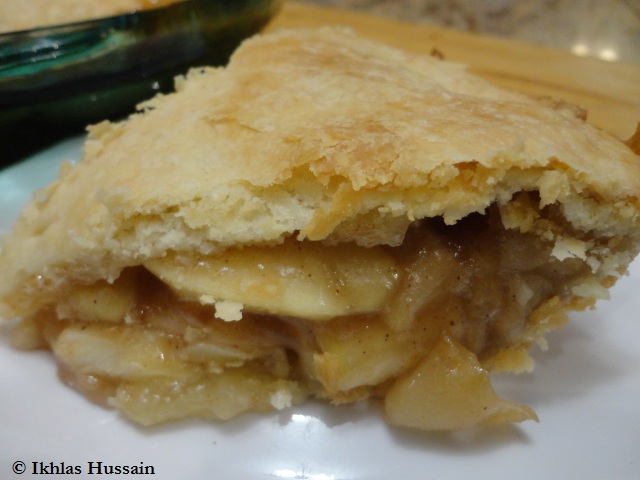 Despite the long time that this recipe took to make, it didn’t rival the pure childlike delight I had as I watched it bake through the oven window, nor the giddy excitement as I stood at the kitchen island, impatiently waiting for it to cool down enough to dive into, nor the pat on the back I received from my dad, who doesn’t really enjoy my M&M studded, chocolate chip littered desserts, nor the taste of of the golden, crispy and buttery crust, with the ooey-gooey apple filling, dotted with spicy cinnamon and nutmeg, swirled with a dollop of creamy vanilla ice cream.

It was so good there was none left the next day! 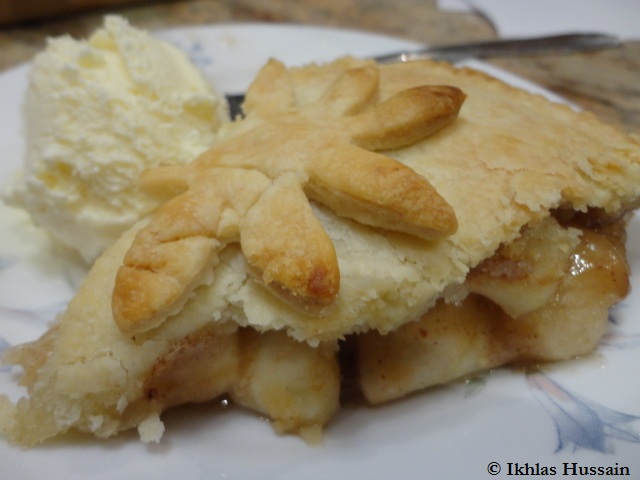 Anyway, if you do try this recipe out, let me know how you get on! I promise it’s not as daunting as it appears 🙂