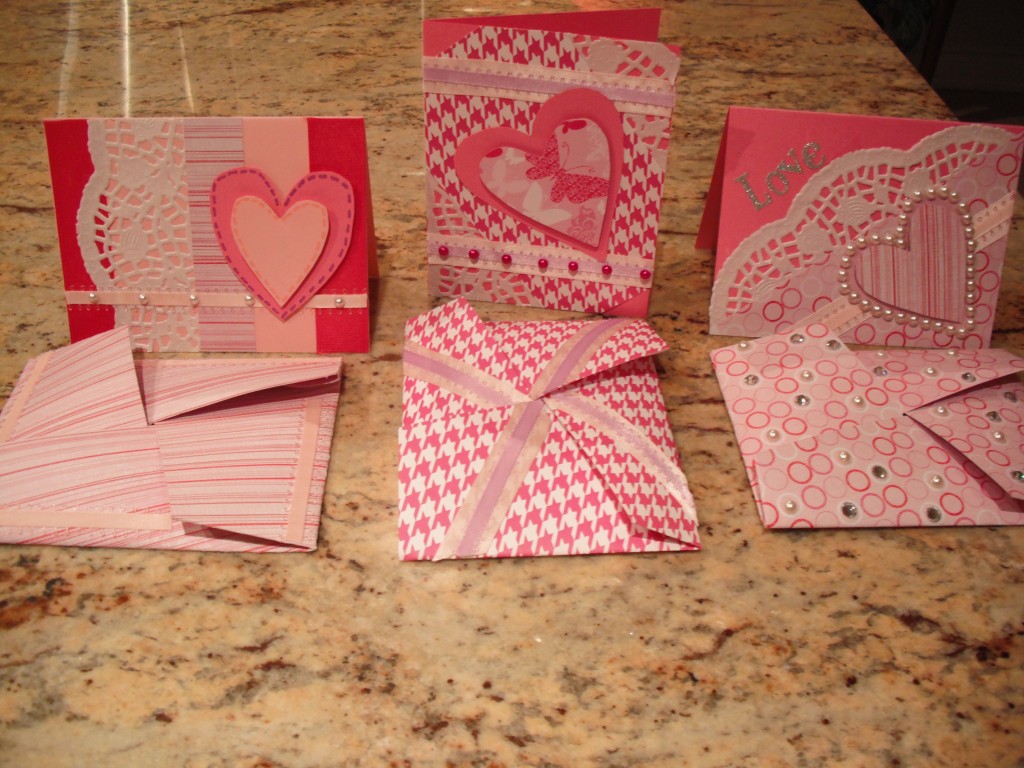 How’s it going? I haven’t been updating this blog very much, other than to write book reviews, but this isn’t just a book reviewing blog…its much more! I was sick for about a week, and am finally on the mend. I didn’t get much writing done this week (read: none), which is something that I have to make up for, but I did get a lot of reading done! If you were following my Goodreads updates, I was on a book-a-day roll and it was awesome!

Anyway, two weeks ago, on the 19th, I had a post-Valentine’s Day party with my friends. I made lots of crafts and cards and have been waiting to share the pictures and tutorials with you all, so here goes!

I really wanted to make handmade envelopes for the valentine’s I was going to give them; I always make my own cards, but use store bought envelopes and so I wanted to change that. So I did what any sensible person would do…I Googled/Youtubed it! There were tutorials galore, but one really caught my eye, because it was so beautiful!

While mine didn’t turn out exactly like the one in the tutorial, I’m still pretty proud of it: 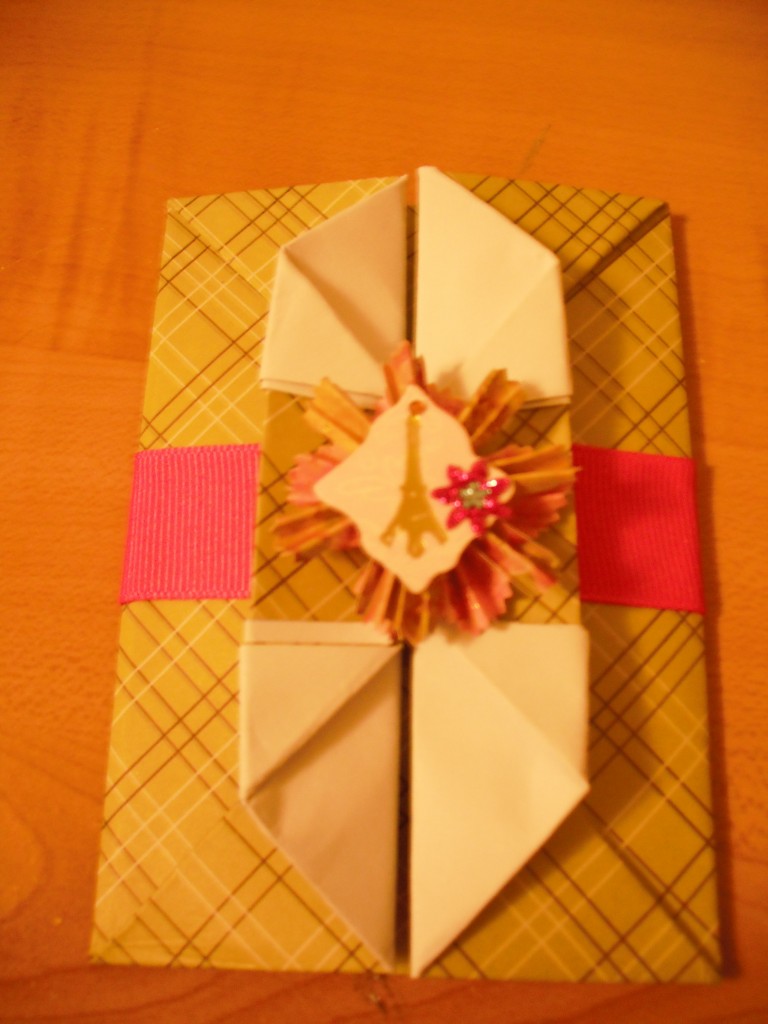 This is how it opens up: 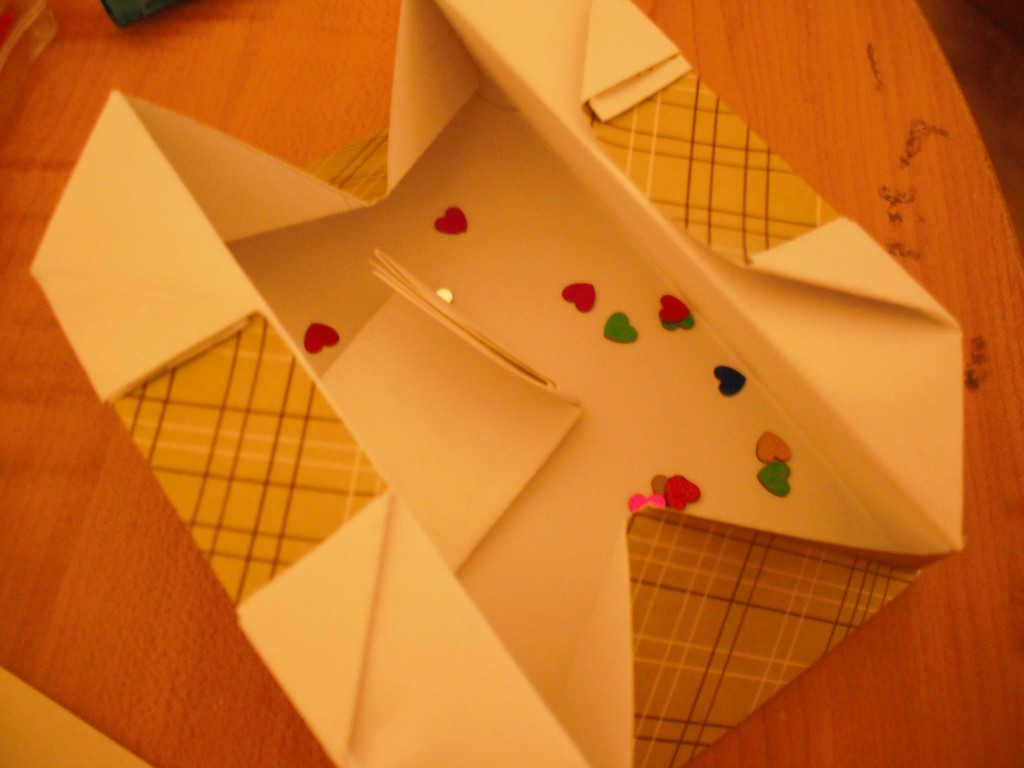 It’s almost like a little container, rather than an envelope because of the way it opened up. I was a bit wary when I saw that this was origami, but it was very easy and doable. Here is the tutorial:

My paper isn’t as fancy as hers (hers looks almost royal!), but I did jazz it up with a pink ribbon and a sticker/frou frou item to keep it all together. If following this tutorial, my only tip would be to use relatively thin paper, since there are a lot of folds involved and it can end up looking messy. Also, make sure your folds are neat and straight, since a lot of them end up showing on the outside.

I didn’t end up using that design for my friends’ valentines, but wrote a little note and left it on the breakfast table for my mom instead 🙂 She loved it!

The idea that I had for my friends’ cards was a bit different, and I wanted to emulate this picture that I had seen on Polyvore. 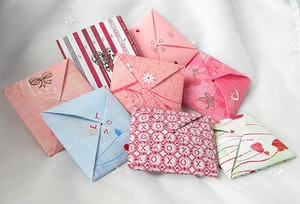 Unfortunately, I didn’t know what this style of envelope was called, but a bit more Youtubing and I found out that it was a Japanese envelope.

Here are my envelopes (and cards), which I made from cardstock. 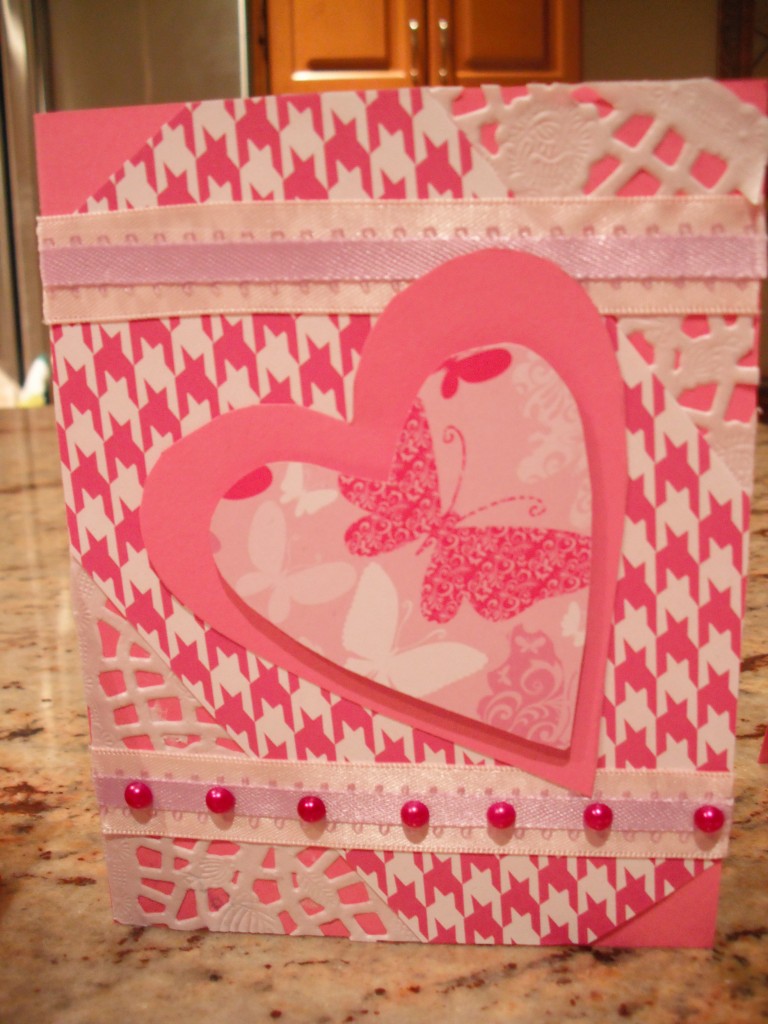 You might note a red, pink and white theme. And hearts galore. ^_^ Cheesy, I know, but I love being cheesy! And my friends loved them, which made up for the cheesiness factor.

Here is one of the tutorials:

For some reason, the makers of this tutorial like to split their videos up into tiny parts, so that this is only the first minute and a bit of the tutorial. There are two other parts, which are similar in length, which should tell you how quick and easy making this envelope is!

My tips: in the tutorial, they say that cardstock works too, but be careful on the thickness of your cardstock. Super thick cardstock won’t fold as nicely, and you’ll have a harder time tucking in the one corner in at the end. Trust me, I tried and the paper just ended up with wrinkles and it looked really messy. So I suggest a thinner cardstock that will be able to support the weight of your card, once it’s inside.

Also, be sure to practice on a scrap piece of paper (of the right size) so that you can get the hang of that last tucking in bit, which can be kind of tricky. Lastly, and this might seem like common sense, but don’t forget to erase the dot and the lines that you draw in the centre when you’re done! Your card is eventually going to be taken out and then your handiwork will be revealed.

The beauty of these envelopes is in the way you open them; technically its the back of the card that I’m displaying, and so I’ve decorated them accordingly. The ‘front’ has been left blank.

Here’s another one I did as an experiment: 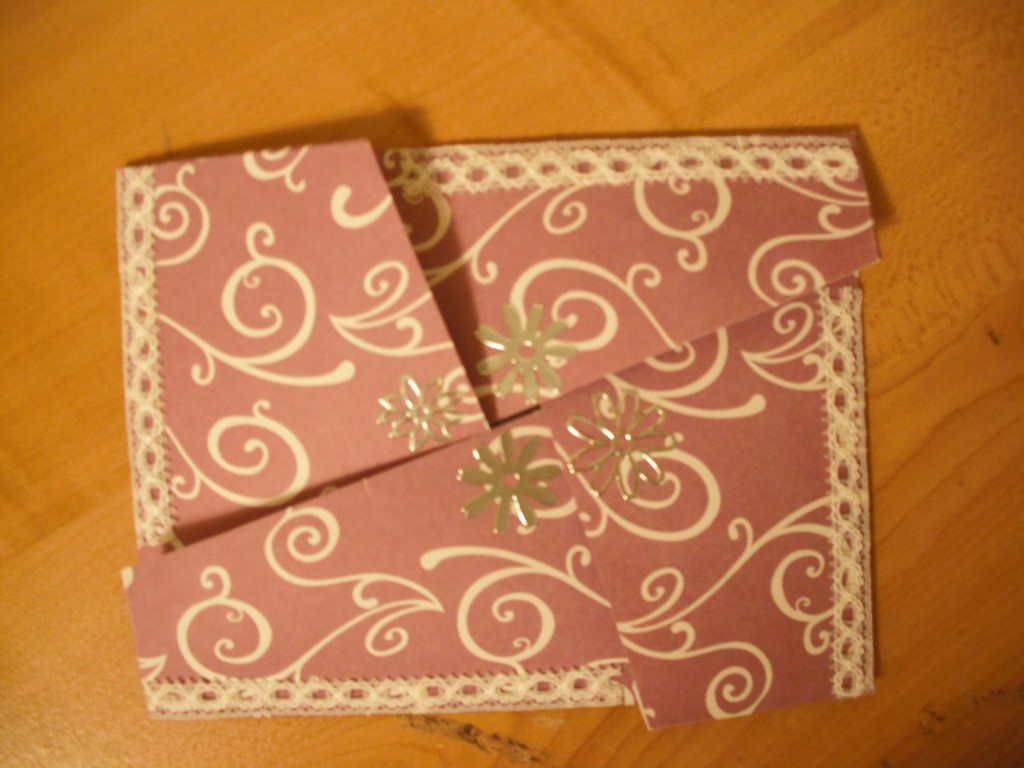 The envelope becomes the showpiece so that your actual card can be plain, so as to show off the beautiful envelope 🙂 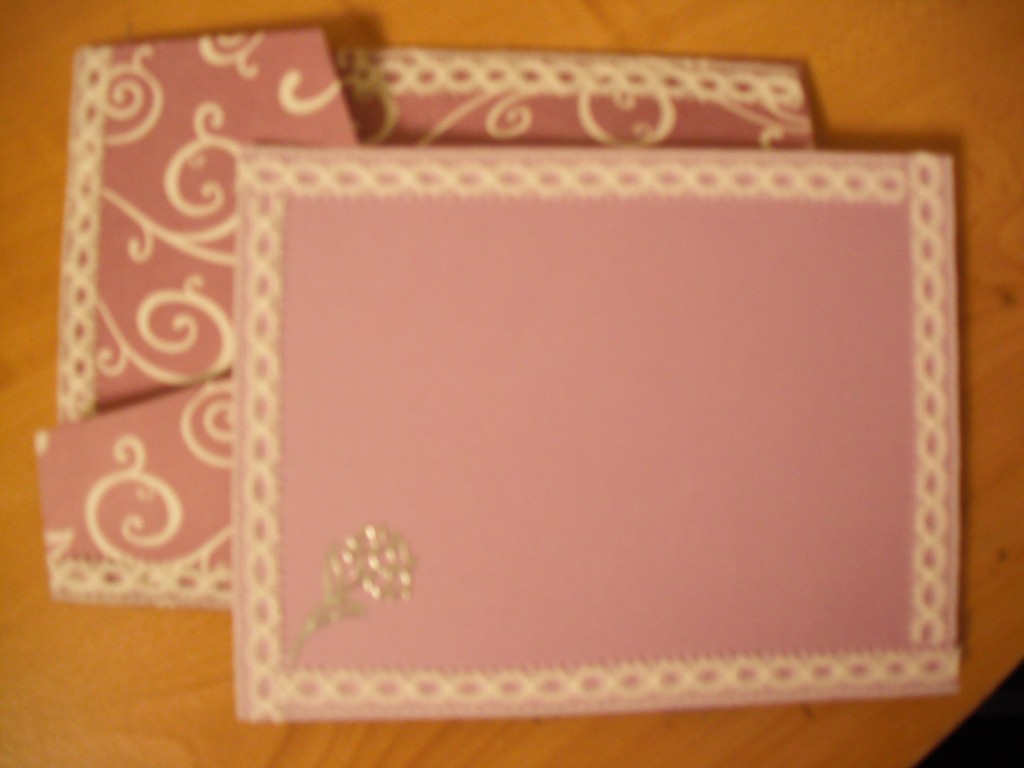 Sorry for the blurry quality on this one >_<

I wanted to make something else for my friends, something a little special so I looked up how to make Rolled Ribbon Roses.

All you need is a roll of ribbon, two hands, and a hot glue gun! Super easy!

Here’s a look at my roses, which I used to decorate my table and my friends’ place settings: 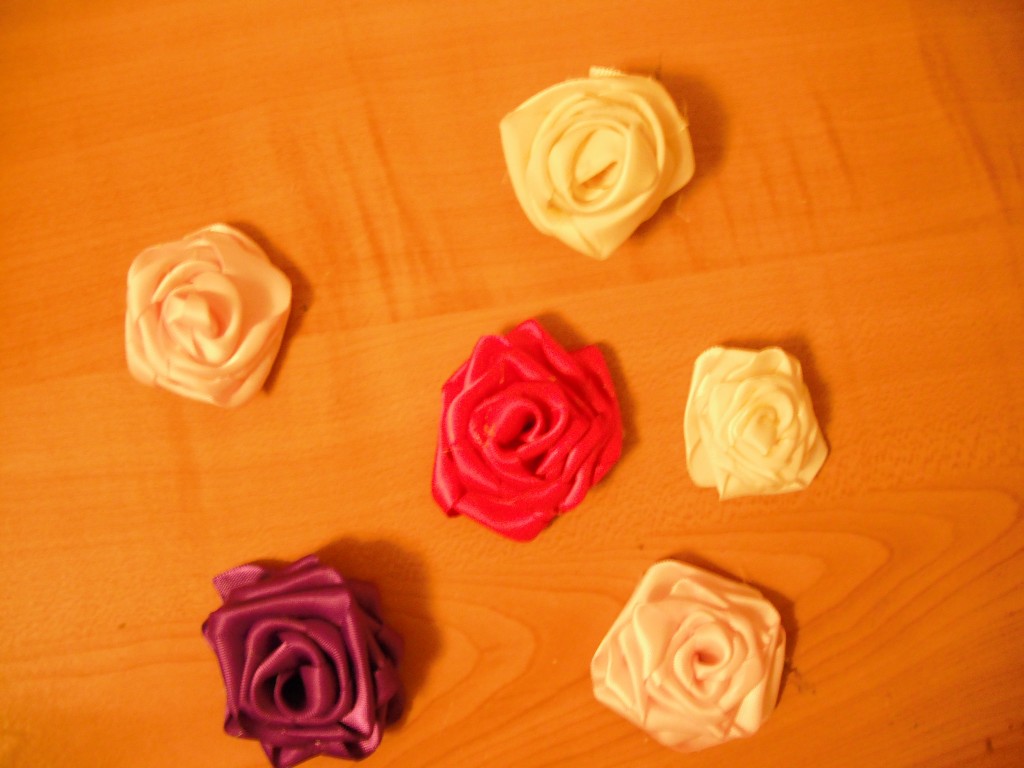 Roses come in all colours, and so can your rolled ribbon ones! I have two that are pale pink in there, but look sort of white-ish.

Here are some close ups: 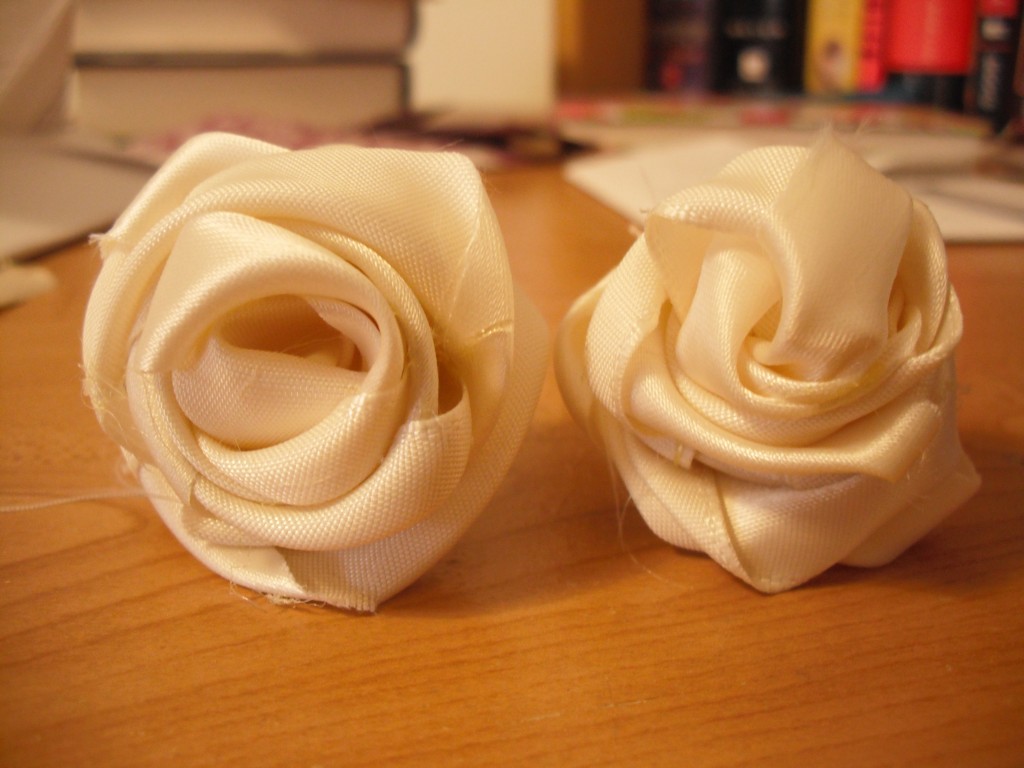 A glimpse of my ultra messy desk >_<

These are the first two roses I made. Can you guess which one was my very first? Hahaha, if you said the one on the right, you’re right! It’s the one that’s still in my room, since I couldn’t give it to anyone. >_< 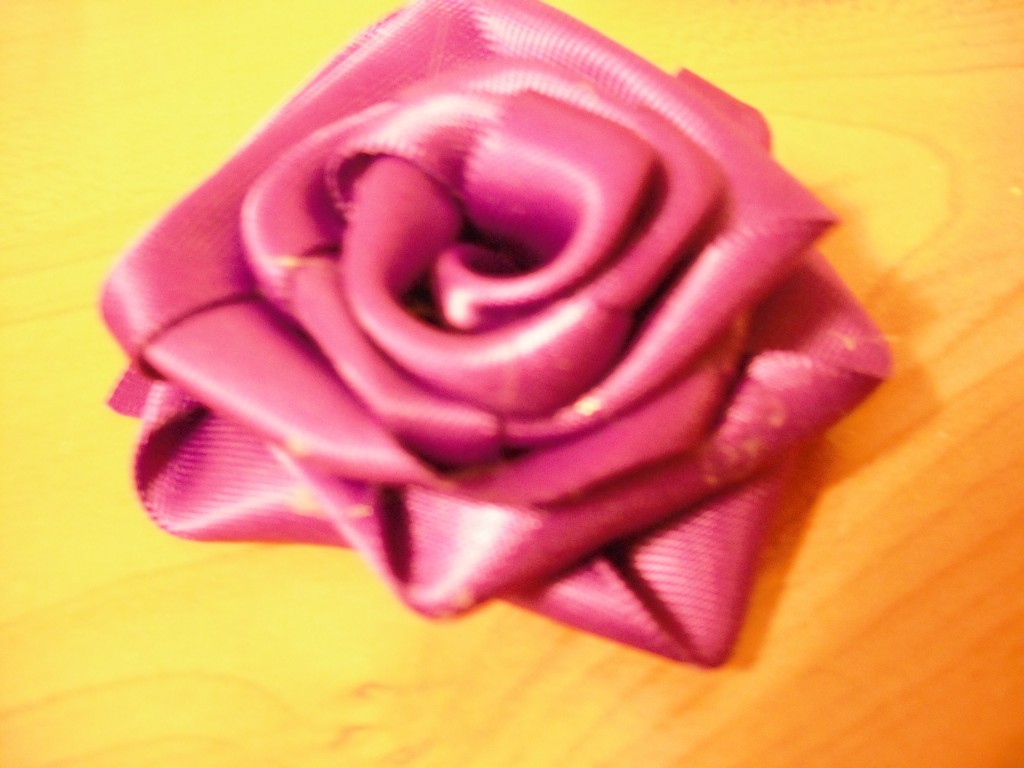 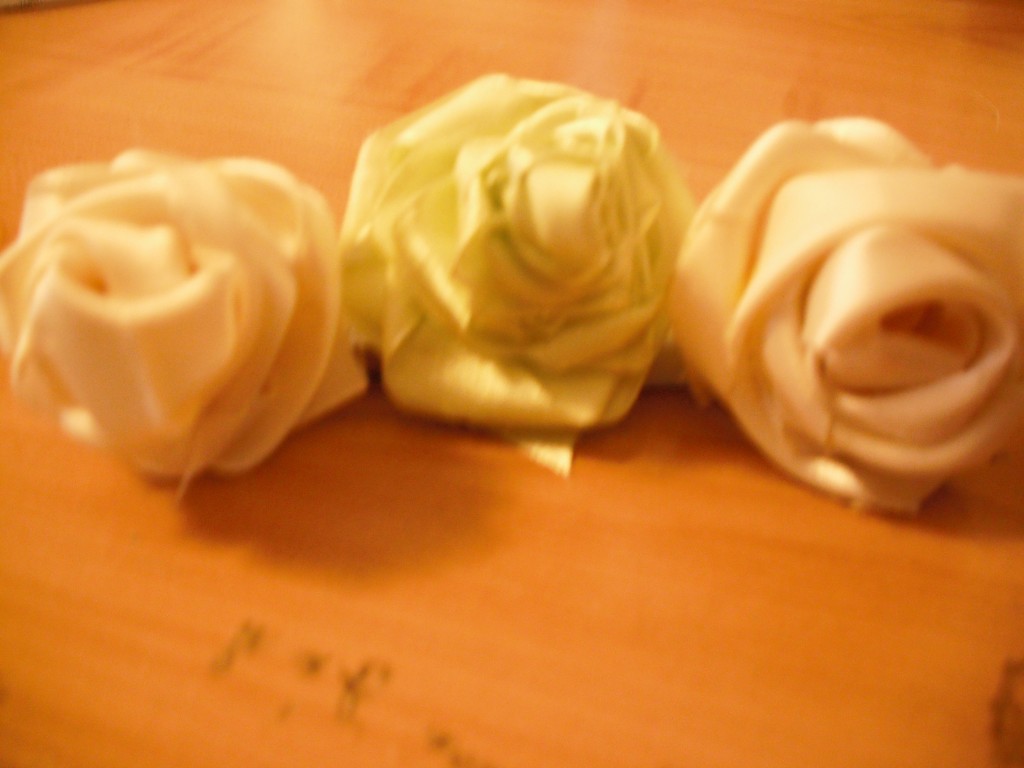 And here’s the tutorial:

Again, some tips: you don’t actually need 2 feet of ribbon as she says in the tutorial (or 61cm for those of us on the metric scale). I found that it was a bit munch and the rose ended up looking deflated, so my recommendation would be 55 or even 50cm, which is roughly 1.8 or 1.6 feet. Also, be careful of the width of your ribbon. The first roses I made (the two white ones) were made from cutting a very wide ribbon in half. That’s why there’s bits of threads poking out from those. In my opinion, these roses were the prettiest, since the wide width of the ribbon gave more depth to the rose. A medium width of roughly 1 inch or 2cm also works, which is what I used for the majority of my roses.

Also, do be careful of the hot glue gun. It goes without saying, but it is very hot, and when squeezing the glue into the layers, its very easy for it to seep through and burn you. So be careful.

Another note about the glue gun is that be careful in how you use it and where you place the blobs. I don’t know what sort of glue gun she uses in the tutorial, but mine kept trailing threads of glue all of the place after I was done putting a blob of glue in the layers of the petals. Sometimes the blob bubbled over and ended up drying on the surface of the petals, which made for a messy rose. You can see this in my picture of the single purple ribbon; there’s a bit of a rough patch on some of the petals from where the glue bubbled over.

So that’s pretty much all the crafts and tips I have for today! Whew! That ended up being a super long post, but that’s why I delayed it for so long, since I knew I wanted to include the tutorials and my personal tips.

Here are some more pictures of how I arranged the cards, chocolate, cupcakes, and roses. 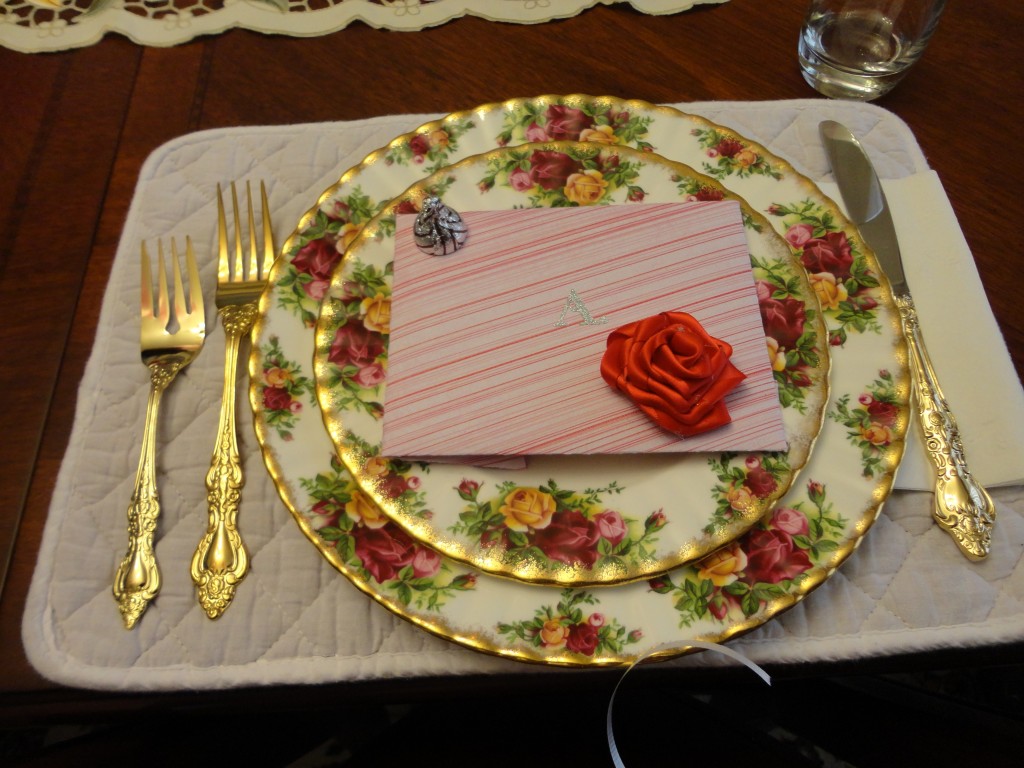 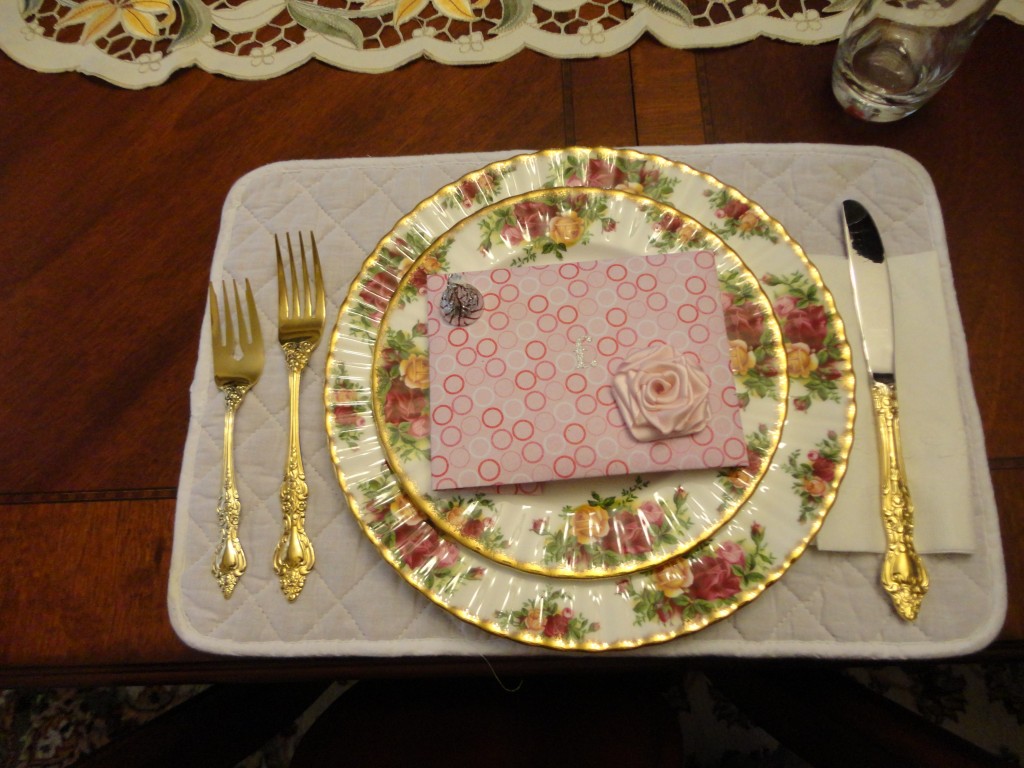 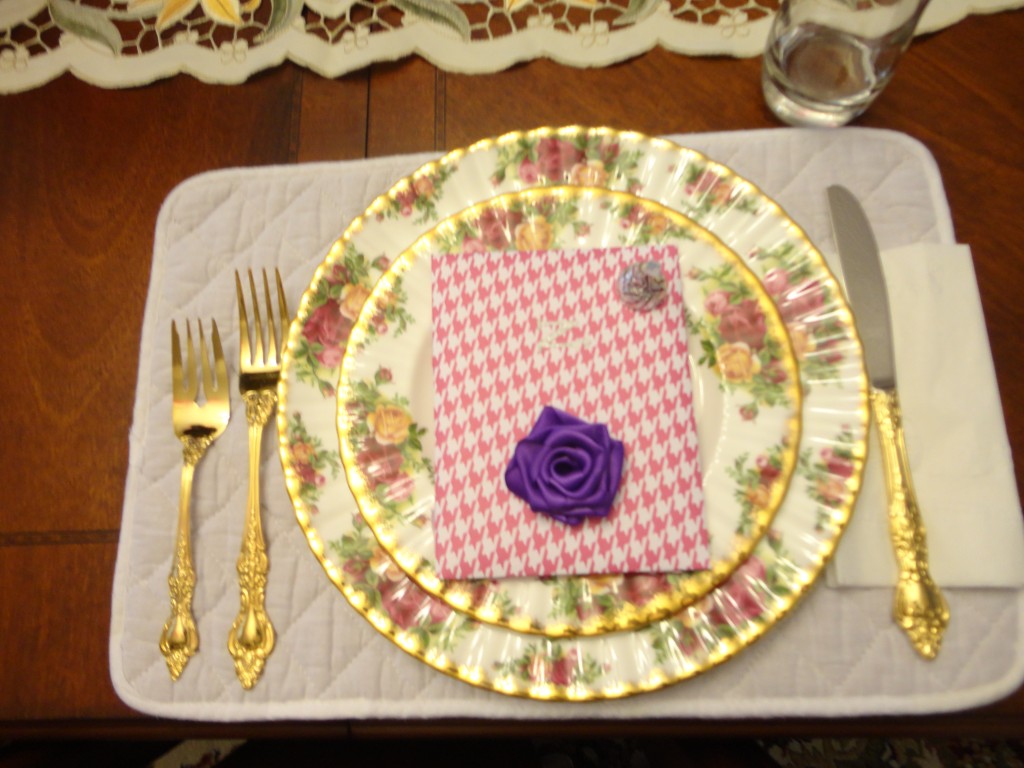 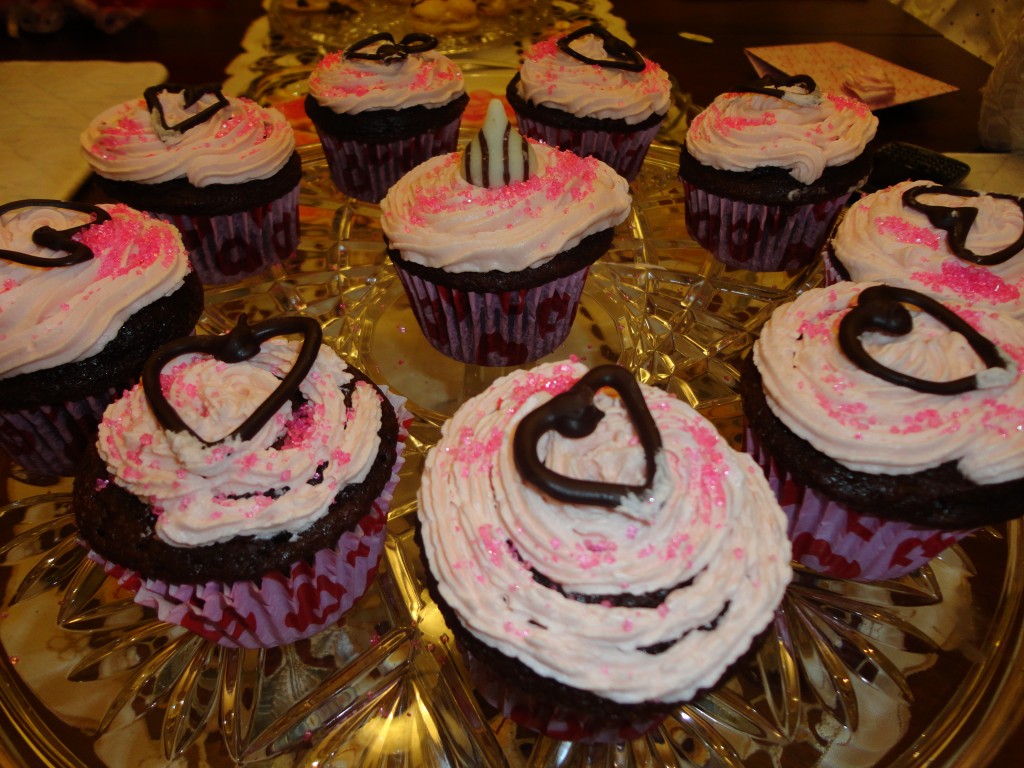 A little bit messy, but oh so good!

I hope you found this post useful, and that it will encourage you to try some of these super easy crafts. They might look hard, but the step-by-step tutorials make it easy to follow along.

As usual, thanks so much for reading!

Hope you have a good evening 🙂