Ever since I was a kid, I’ve had an obsession with all things British. Growing up, I had a British best friend, whose mom was so much cooler because she had a British accent (at least in my opinion).

I grew up reading Harry Potter, and practised my British accent at home and in my head. Things obviously sounded better.

I devoured Jane Austen novels and used to wish I lived in Victorian England, only until I discovered their hygiene wasn’t the greatest.

I was furious when I discovered that the movie version of Confessions of a Shopaholic wouldn’t take place in England, that Becky Bloomwood would lose her very essence by being removed from London to New York.

In terms of fashion, I’ve always been appreciative of British clothing and design, especially since everything my friend would bring home with her from her trips to the UK every few summers was beautiful and had me drooling with envy.

So when I found out that British brand Top Shop was opening up a small store in The Bay at Toronto’s Yorkdale mall, I couldn’t believe it. I’ve been drooling over their clothes and accessories for a few years now, but couldn’t afford anything, since they don’t have a Canadian website and so shipping costs an arm and a leg and a few fingers. 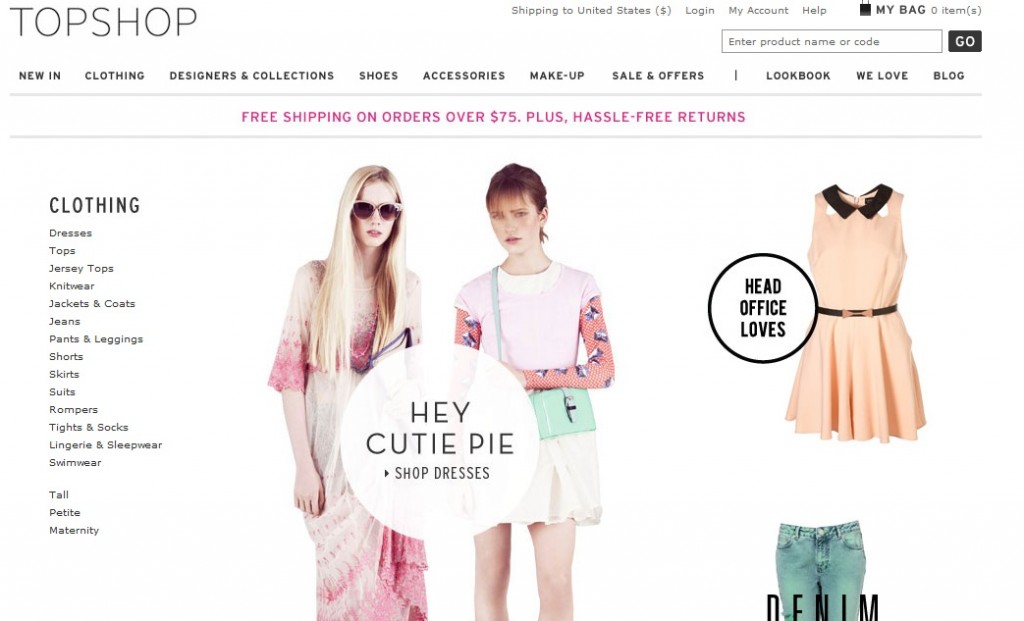 I couldn’t get to the shop last year, but today was told that we would be stopping for a minutes at Yorkdale, on a longer trip with my mom and her friend. I immediately made plans to make a stop, no matter how short, to check out their stuff. And oh my, I was salivating the second I stepped off the escalator to the small, enclosed section of the store.

Their stuff was beautiful. Gorgeous, chic fabrics, feminine and frilly patterns and cuts, and really great quality. This stuff was not cheap and the price tags confirmed this.

Here’s some stuff from their website, just to give you an idea. I didn’t see all of this stuff, since their shop in The Bay is a small one, but it was all just so beautiful. I wanted it all.

I actually saw this!

It was all so pretty, but so so expensive. So since I knew I wasn’t going to come back any time soon, and really, we spent all that gas money anyway, I ended up buying a bag 🙂

Isn’t it beautifullll?! And yes, its pink. I have a lot of pink, I know, but I just couldn’t resist! Its got faux snakeskin detailing and cream accents and its so unbelievably soft. Besides that, its the perfect size for all my stuff (wallet, agenda, notebook, pen, makeup, a book) without being overly huge and bulky. Its perfect!

Did I need it? Probably not…

Other than that, I’ve been volunteering with an Islamic convention, which is why I haven’t been updating so much lately, except to do book reviews. I’ve also been writing a lot too, which makes me happy. The deadline I set myself is coming up soon, so I really hope I can finish the first draft by then, so that I can get going on revisions.

But I feel like I’ve finally hit my stride now and am excited to see where the story takes me.

I’ve been reading so much over the past few weeks that I haven’t really been getting much writing done. Its hard because I get sucked in really easily and constantly have a book on the go (this is a common problem), so that I get distracted easily. So I’m not quite sure what to do. I know some authors who don’t read while they write, but that would be like not breathing while I write. So I’m thinking to sticking to books I’ve already read; I tend to take things a bit slower with them (sometimes), since I know what happens next. Or maybe switching to Classics for a bit might be beneficial…

Before I sign off, I just wanted to do a shoutout to my cousin Sabila, who has recently informed me that reads every post of mine. So thanks Sabs! I still remember when you used to eat dirt. 😀 Hehehe ^_^ Just kidding, I love you! 🙂

Anyway! I hope you all had a good weekend 🙂