So yesterday I had the pleasure of meeting and catching up with my good friend Chelsey, from Chels and a Book. I hadn’t seen her in ages! And by ages I actually mean ages, and not a last week, like my dad always claims I say.

We went to Humber together last summer for the Creative Book Publishing Program and that’s where we bonded over our mutual love of YA. After graduating from Humber, we didn’t have a lot of opportunities to meet in person (we did go to a Sarah Dessen signing though!), given both our busy schedules and the fact that we live on opposite sides of the GTA (Greater Toronto Area for all my non-GTA friends). But I love reading her blog and using it to find out what’s going on with her.

Chelsey had been telling me that she had some books set aside for me for quite some time and wanted to give them to me, so we set a date and met up. 🙂 It was such a beautiful, warm day yesterday, and despite the fact that I got a tiny bit lost on my way to the subway station, it was so worth the half hour drive to go and see her.

So here’s all the awesome loot she gave me. Since Chelsey is interning at a publishing house right now, she always hears about the coolest books. 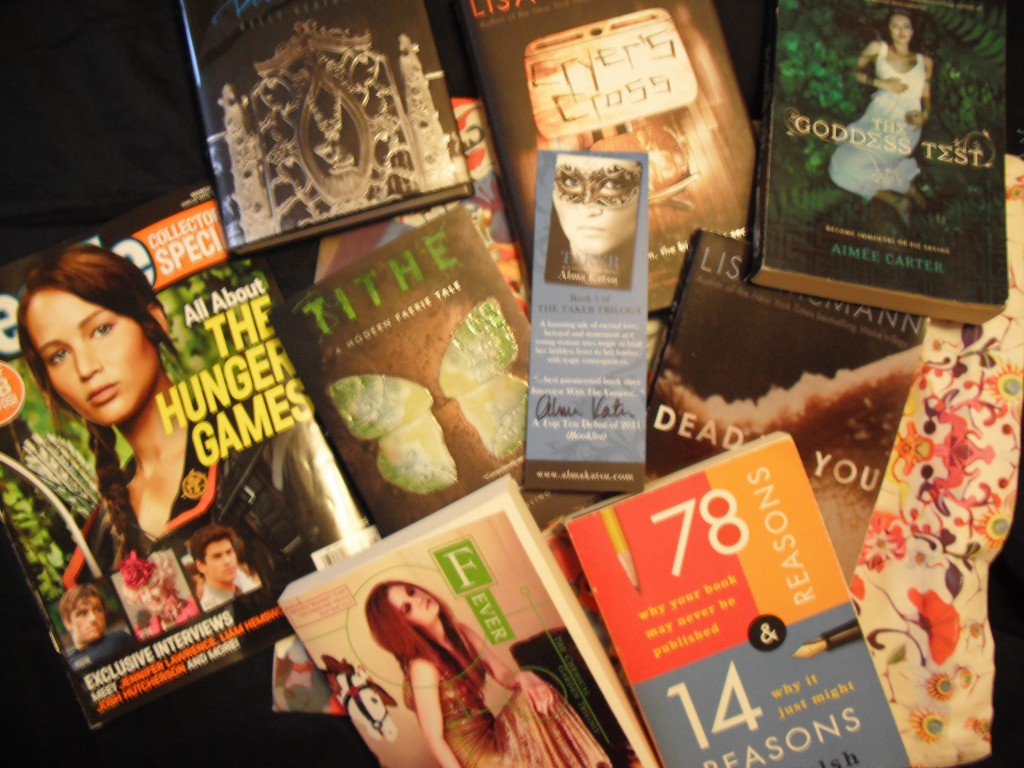 The first thing that she handed to me once we sat down, slurping on our respective coffees and Iced Caps, was a People magazine which was full of Hunger Games photos and tidbits! I don’t actually buy or read a lot of magazine (except for when I skim the headlines in tedium while waiting in the grocery store line), so this was a real treat for me.

I’ve never heard of this book before, but was so excited when she plopped it on the table in front of me. I read a lot of publishing blogs, and did a lot of research a couple years ago when I was submitting stuff, but I’m really eager to get into this and prepare myself again.

I’ve actually read The Goddess Test before, but I don’t exactly remember the details, so I might read it again.

Even though I had some issues with Wither, I was pleasantly surprised to see an ARC of Fever in my bag of goodies. I’ve had a hold on this for awhile and didn’t expect to get a copy anytime soon, so I’m excited to dive back into Rhine’s world.

I haven’t read too much Holly Black before, but I love fairy tales (who doesn’t?) and the idea of the protagonist being a ‘modern nomad’ is intriguing.

These are both by Lisa McMann, who I haven’t heard before, but both sound creepy and full of mysteries, which I love.

The cover of this one got cut off at the top of my picture there, but the cover in real life is gorgeous! Its so dark and I love the raised font and the creepy looking gate. This one’s apparently about the Greek legend Medusa. I’ve noticed Greek legends are more and more in lately (I think people are getting sick of vampires and angels), so maybe this is the new trend?

The last thing Chelsey gave me was a signed bookmark of Alma Katsu’s The Taker, which is soon out in paperback! 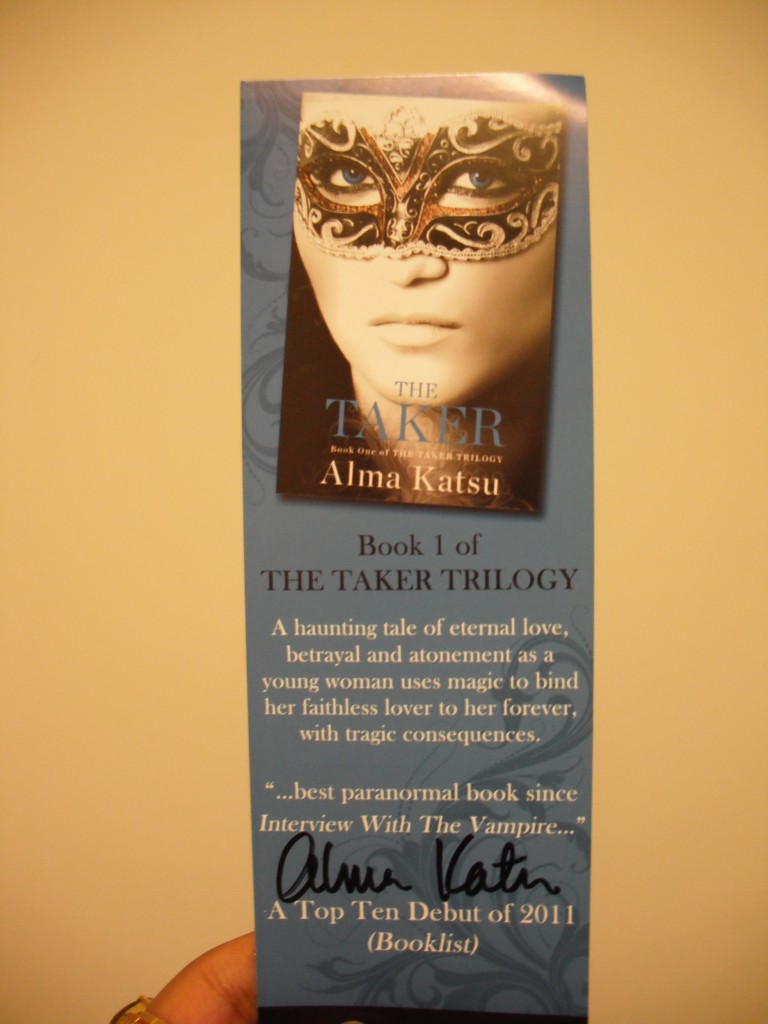 Here is the new cover vs. the old cover of The Taker, which I absolutely loved. Its most definitely not for the faint of heart, but it was so good.

I think the new cover is much more eye-catching, and I’m so excited to see more people discover it and fall in love with its intense and haunting depiction of human nature at its worst. Plus the author, Alma Katsu, is a sweetheart and really connects with her readers, which is so awesome.

Whew! That was a lot of stuff! I didn’t expect to get so many books from Chelsey when she told me she had stuff to give me, but I’m so excited to dive into these. I still have some library books left over from last week, so I probably won’t get to these until next week.

Thanks so much Chelsey for the lovely loot and a lovely time! I hope we don’t wait as long to see each other again ^_^ If you haven’t checked out her blog yet, what are you waiting for?