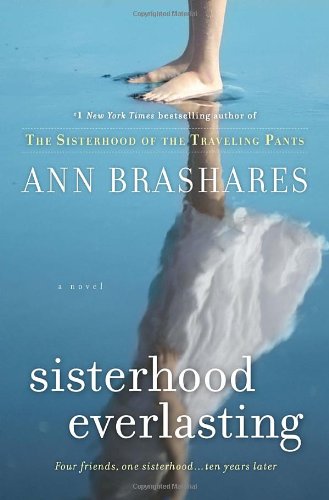 Lena, Carmen, Tibby, and Bridget have been friends since before they were born. Their mothers became friends while attending a prenatal class and the girls were all born 17 within 17 days of each other. Throughout life, they’ve stuck together.

In Sisterhood Everlasting, ten years have passed since we have last seen the Sisterhood and its been ten years since their beloved pants have been lost to them. Time has kept some things constant, while other things have changed.

Lena is just as hesitant of life, and hasn’t spoken to Kostos for quite some time. She spends her days alone in her apartment in New York.

Carmen is an actress on a soap opera, and is engaged to be married to a man she’s not even in love with.

Bridget continues to be a free spirit, as she lives in California with Eric, and lacks stability.

But it is Tibby that has gone the furthest away from them all: to Australia with Brian, and the girls hear from her one fateful day when they receive letters to meet at Lena’s grandparents’ house in Greece, the place where they lost the pants.

As the girls eagerly make their way to Greece for their reunion, a series of events unfolds, which takes hold of their lives and changes them before.

Before you read any further, let me warn you of major spoilers. If you plan on reading this book and are a fan of the series, DO NOT CONTINUE READING. I hate spoiling major plot points in books, but I feel its necessary in order to talk about this book properly.

So first off, let me just say that I’m a BIG fan of these books. I read the original Sisterhood in high school (like a lot of my favourite series) and they were perfect at a time when I was struggling. And while I started to lose interest as I got older, when I heard about this final book (post travelling pants, if you will), I was excited.

Like I mentioned, some things have changed and some things haven’t. The girls continue to be themselves and that’s something that I’m really glad Brashares maintained. Obviously they’ve changed, but they still felt as familiar as a well-worn pair of pants to me.

One of the things that made me hesitant to read this book was a review I read by Kirkus Reviews. They revealed a MAJOR plot point and I was so upset that I didn’t really feel like reading the book anymore.

Tibby’s death comes as a shock, especially as certain clues comes to light, which hint that it was actually a suicide. The girls are obviously traumatised by this news, and by the new clues that they discover. Tibby has left letters for them all, with specific dates marked on them which is when they can open them.

Lena, Carmen, and Bridget try to continue on with their lives, but its obvious that its going to be difficult to do so. Each girl has her own way of coping with the grief: Bridget up and leaves, Carmen throws herself into work and her wedding, while Lena wallows. The hole that Tibby has left in their lives is gaping, and I really felt the emptiness of her and her voice in the story. But even though Tibby isn’t actually in the story, her presence is everywhere, as the girls reminisce.

I wasn’t fond of Carmen in this story. She’s one of my favourite characters, but I found her to be almost distant and not as engaged in what had happened with Tibby. Unlike with Bridget and Lena, whose grief was almost tangible through the pages, I never felt Carmen’s sincerity or her care. She was just so bland.

At the same time, I was equally disappointed with Bridget and the way she just leaves Eric. The same with Lena and her non-relationship with Kostos. Both of these things have happened before in previous books, so I was a tad disappointed with Brashares for repeating this again, because honestly, it was tiring. Especially with Lena, who has gotten together with Kostos and broken up with him so many times. I was exhausted to read about it again.

I also didn’t like how the girls didn’t reach out to Brian, Tibby’s boyfriend, after the accident. Logically speaking, I feel like you would want to put all the pieces back together of someone’s life, but the the story just becomes about the girls and their grief (which is kind of the point), but it would have made more sense for them to try and understand what happened, earlier on, rather than when their grief becomes insurmountable.

All in all, I thoroughly enjoyed reading Sisterhood Everlasting and finished it in one day. The ending was of course bittersweet, but did give closure to these four (now three) amazing girls, who have been through so much together.