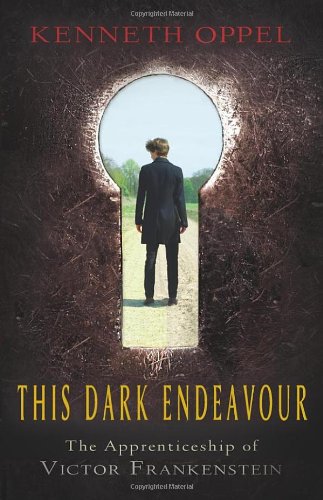 The delicious This Dark Endeavour by Kenneth Oppel is a retelling of the classic Frankenstein story, by Mary Shelley. It tells the story of 16-year old twin brothers, Victor and Konrad, who are adventurers and mischief-makers. They live with their family, the Frankensteins, and their cousin Elizabeth in Frankenstein Chateau, in the city of Geneva.

When Konrad catches a deathly disease and slowly treks down the path to death, Victor makes up his mind to pursue the elusive Elixir of Life (also known as the Philosopher’s Stone in another story), a concoction that is said to cure and prevent diseases and increase life span. With his cousin (and secret love) and friend, Henry, Victor begins a dangerous journey to search high and low for the 3 ingredients to the Elixir of Life, with the aid of an old alchemist who had made the Elixir in his youth.

I absolutely loved this book. This Dark Endeavour is pegged as a prequel to Frankenstein and it reads as such, with delicious little tidbits of Mary Shelley’s details from the original work thrown in.

Written for a YA audience (which obviously didn’t exist when Shelley wrote her work), Oppel takes some obvious liberties with the story and refashions it in a different light. The main difference I speak of is Konrad, Victor’s twin, who obviously doesn’t exist the original. But the liberties make sense and help to weave the story together and help to explain Victor’s personality and habits, which readers are quite familiar with from the original.

Victor was a rather dark character, and I really enjoyed that about him. I do enjoy my heroes with a smidgeon more darkness, and that is exactly what Oppel delivers. Victor is selfish and proud and jealous, and these sentiments motivate his actions throughout the book, for good or for bad.

His jealousy with Konrad is beautifully described, as he struggles to gain a name, a reputation, for himself. And that’s not all he’s trying to gain.

His twin desire to win the affection and love of his (distant) cousin Elizabeth is also intriguing to read about, and is described in such a perfect way, which resonates with Victor’s desire to beat his brother.

This brings me to Elizabeth herself. She’s a rather fascinating creature in the original by Shelley and Oppel does a great job fleshing her out here. Her brashness and fearlessness are given more volume here, as she matches herself to the twins’ strength and accomplishments. There is also something peculiar about her, which is only hinted at briefly, which I am certain will make an appearance in later books.

Since the book is a prequel, Oppel masterfully sets the stage for what is to come, as Frankenstein’s monster begins to emerge, quite subtly, by the end of the book. The opening scene of the book also gives a hint at what is to come.

Before reading this book, I read a lot of great reviews about it, which propelled me to buy it and read it myself now instead of sometime in the future. The reviews kept mentioning THE! BIG! THING! that happens at the end and I eagerly waited for it, wondering if there was something completely new that Oppel threw in.

When I got to the ending, I wasn’t surprised. I felt that if anyone had read Shelley’s Frankenstein and also kept in mind that this is a prequel to the original, then they would ave figured out this so-called game-changed. Maybe because I was already forewarned or maybe because I’ve studied the book twice in university, I wasn’t surprised and had a bit of an inkling this would happen.

The film rights to This Dark Endeavour have already been sold to Summit (the! Makers! of! Twilight! Ugh) so that was also something that I had in the back of my mind as I read. With a fast-paced narrative, tons of gripping action, and deep and troubled characters, I think this will make a great film and am really excited for when it comes out.

Now, if only word would be released on the sequel to the prequel!