So you may or may not have noticed that I’ve been a teeny bit lazy about updating this blog. Its weird, because when I’m in school and am on a schedule, I’m way more on top of things than I am when I’m at home and not doing anything. Very weird.

You might have noticed that I haven’t really posted much about books I’m reading, but that doesn’t mean I’m not reading any!

When I was in my publishing program, I was receiving books from visitors and borrowing them from classmates and friends, which was why I was able to blog about them. As a recent graduate under debt, I don’t buy a lot of books (I never have), unless I’m certain I’m going to reread them. So I haven’t really been reading any new books lately.

I live in a small town (unfortunately) and with that comes a small library. The problem with this is that my public library doesn’t have a lot of new books, or if it does, they’re on order and don’t come in till months later. This is why I’m rereading a lot of old books right now, such as… 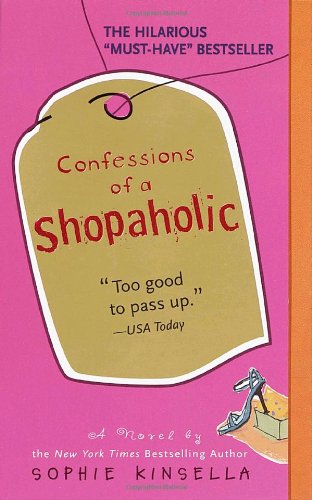 Confessions of a Shopaholic (among others) by Sophie Kinsella

I first read this series in grade 11, since it was recommended to me by a friend. I immediately fell in love. Over the years, I’ve read every single new Shopaholic book as its come out (as well as other Sophie Kinsella books) and I have to say, it really is like sitting down to chat with a friend, over a cup of coffee and a Kit-Kat. Except this friend is hilarious, like literally laugh-out-loud funny. This friend is also very warm and endearing, so much so that you want to give her a big hug and be her best friend. This friend has the best clothes (obviously) and makes you want to rush out to the shops and buy all the things she’s mentioned, even if you’ve never heard of them before (this isn’t always a good thing). This friend is British, and so has the funniest witticisms, so that after one chat, you start saying British phrases like, “Pants!” or “Its gone 10 now”.

So if you haven’t picked up a Shopaholic book, you don’t know what you’re missing. Yes, the books don’t win a nobel prize for best book of the century, or whatever, but they’re funny. And they make you laugh and feel warm inside, especially when you’re down.

A Great and Terrible Beauty (trilogy) by Libba Bray

I first read this book in grade 9; I picked it just because of the gorgeous cover (isn’t it beautiful?!), even though my mother wondered what it was about, and told me not to read it. (But of course I still did).

This is a curl-up-in-your-bed kind of book. Its creepy and scary and daring and sad all at once. Its about a 16 year old girl living in the Victorian era, Gemma Doyle, who has visions, which start on her sixteenth birthday, when she sees her mother killed by a dark creature. Gemma is the link to the realms, a place where dreams are shaped and destiny created, and she travels between the real world and the realms, while attending Spence Academy for Young Girls, in Great Britain.

There’s a lot of books in this creepy and supernatural YA genre now, but I feel like this started it, since it is a lot older than many of the newer ones now. Bray is also a beautiful writer, capturing the voice of awkward Gemma, who doesn’t feel she belongs either in the realms or in the real world. I loved reading about Gemma’s adventures at her boarding school and with her friends, as well as her adventures in the realms.

The final book in the trilogy isn’t my favourite and the ending sort of soured things for me (because the main love interest turns into a tree in the end!!!!)) but its still a wonderful story, as you follow how Gemma and her friends as they grow up and change in a society which restricts girls’ freedom. I love Victorian Era and Bray did so much research to paint an accurate picture. I felt like I lived Gemma’s story.

Harry Potter and the Philosopher’s Stone by J.K Rowling

So I wanted to reread Harry Potter and I got as far as half the first book. But then my brothers and I started a Harry Potter movie marathon. We’re only as far as the fifth movie (they’re long!) but I stopped halfway because I didn’t want to keep hearing Daniel Radcliffe’s 11 year old nasaly voice in my head, and wanted to picture things the way I’ve always pictured them. I’m hoping to go back once a) my movie marathon is done and b) I’m done reading other series.

And that’s pretty much what I’ve been reading these past few days! I keep alternating between books in the Shopaholic series and the Gemma Doyle series, which is why I’m not quite done either.