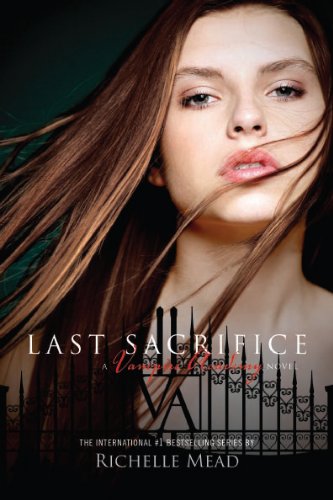 So I know I only posted about an hour ago, but I just finished Last Sacrifice, the last book in the Vampire Academy series and I want to write down my review down, before my mind gets muddled up by other, useless things. Like homework.

Murder. Love. Jealousy. And the ultimate sacrifice. Now, with Rose on trial for her life and Lissa first in line for the Royal Throne, nothing will ever be the same between them. From Goodreads.

The review on Goodreads is kind of flimsy, so let me fill you in.

I loved this book. Like I mentioned in my review for Spirit Bound, I started the last book quite soon after Spirit Bound, which is my review was so short. I was getting mixed up with the events of both books.

So I whizzed through this book, putting off homework and calls downstairs to dinner, to just read one more page, one more chapter. And I haven’t done that for awhile now (except maybe for Blood Promise).

Since Spirit Bound ended on such a dramatic turn of events, Last Sacrifice wasted no time jumping right in to Rose in her prison cell, suspect #1 for killing Queen Tatiana. The action kicks off right from there and doesn’t stop till the last 10 pages, where it sort of slows down.

Rose, Dimitri, and Sydney form an odd group on the run, as they travel throughout the Midwest, trying to find some way to clear Rose’s name and also find Eric Dragomir’s illegitimate child, which is a way to get Lissa to be considered in the election for the monarchy.

Romantic tensions heat up, as usual, as Dimitri and Rose have to face their growing attraction and love, and what this means for Rose and Adrian’s relationship. After pushing Rose away for so long, Dimitri has to face his guilt from what he did as Strigoi.

What kept this book moving was the constant back and forth between Rose and Lissa. For once, the bond didn’t annoy me, but kept the book moving at a brisk pace, as both girls fought their hardest to help the other, in their different, but related, missions. Every reprieve into Lissa’s mind brought new information to Rose, information which she used for her own plans to find the illegitimate child of Eric Dragomir, to help Lissa get her vote.

The book could have easily spiralled into a murder mystery (which would have been a big departure in tone), but what kept it from doing that was the many plots and plans that were taking place throughout the book. Small, irrelevant facts in the early books are mentioned again, where they play a bigger role, so that Rose is not just trying to find Lissa’s sibling, but also connect all the secret motivations of everyone around her.

Rose is amazing in this book. When I first started the series, I was not fond of her at all. I found her annoying, whiny and vain. While there were still times that I wanted to shake her violently, I still found that she had grown and matured beyond belief. There is a very dark moment that occurs for her, and while she is affected by it, she snaps out of it quickly. A little too quickly, in my opinion. Rose does something that should shake her to the core and change her, but after the one chapter within which it occurs, I didn’t really see evidence of it the bigger impact, which I think is a failing on Mead’s part. I think the impact of something so huge should be visible, but Rose doesn’t seem too distraught.

As the story moved toward the conclusion, I couldn’t for the life of me think of who the murderer was. A name is thrown around, one that I was shocked to hear, but didn’t quite agree with. So when the real murderer is discovered, I actually gasped. I had never seen it coming.

From there the energy that had been driving the plot so far, sort of peters out as all order is restored and everything goes back to normal. Sort of.

Lissa’s step-sibling has an important role to play, and I won’t say more that, except there are still lingering questions about their role and how Lissa will adapt after all of this. The romantic conclusion of the story was one that was foregone, in my opinion, so it didn’t really surprise me when it happens.

One thing that did bug me was the end. After such a fast and moving plot, the events sort of slow down as Mead goes on to describe the ‘what’s next’ part of the story with great detail. Some people love seeing all the loose ends wrapped up, and usually I’m one of them. But this time, I think its too neat. I’d have loved to see some greater consequence of the characters’ actions on each other.

That’s all there is; there isn’t any more.