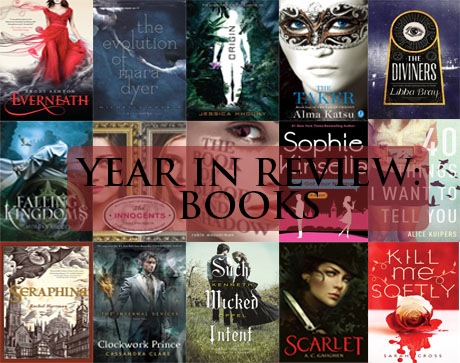 So I read a lot of books this year. 80 according to Goodreads. Technically, I read more, since I love rereading favourites, but we won’t go into that now. ^_^

I’ve never done this before, but considering the fact that I posted a lot of reviews on the blog, compared to last year, I wanted to take a look back at all the books I read and reviewed and loved and hated. When trying to prepare this post, I couldn’t really remember  that many stellar titles, but then as I went through my Goodreads list and through all the books I had read, I realised there were quite a few that I loved!

So instead of posting a list of the top 5 books I loved or something similar, I decided to break it down into sub-categories. We all know how much I love YA, but after compiling this list, I realised I’m actually quite varied in my reading taste in YA. It might not sound like much, but it’s something!

So this includes all the books I read this year; for the most part, they were published this year, but there are a few exceptions. All the books in each category are ones I have rated 3 stars or more, so they are all titles I enjoyed.

So without further ado, let the games begin!

I don’t actually read a lot of adult fiction, or rather fiction that’s not for the YA market, but this year I read some titles that stick out in my mind when looking back at the year. All of the above titles told me stories that made me laugh and cry, sometimes at the same time.

But there’s one that stands out by a mile, and is and possibly even my favourite book of the year. The best adult fiction that I read this year was Alma Katsu’s The Taker. The first in a trilogy, The Taker wasn’t actually published this year, but I read it early this year and it’s stayed me with since then. I’ve already reread it a few times, because I loved it so much. Told in a haunting, beautiful voice, The Taker is equal parts historical, paranormal romance, and horror. I simply couldn’t put it down.

As much as I love adventure and action, I really enjoying sitting down with a contemporary YA novel, in which the focus isn’t on the plot, but more so on the characters and their relationships. I think that’s what makes the above contemporary YA novels stick with me; they all had amazing characters and especially unique female voices, which drew me in and wouldn’t let me out.

My absolute favourite though was 40 Things I Want to Tell You by Alice Kuipers. From the cover, this seemed like a typical good-girl-falls-for-bad-boy YA novel, but actually, it was so much. From Bird to her parents to Griffin, her boyfriend, to Pete, the bad boy, no character was what they seemed, and I loved falling in and out of love with our heroine, Bird. Only in high school, Bird’s voice seems more mature for her age, but that doesn’t mean she doesn’t have some growing up to do. Kuipers voice is clear and honest, and watching Bird stumble and fall throughout the story was a delight.

I don’t actually read a lot of fantasy, YA or otherwise, but this year I read some stellar titles. The key, for me, in fantasy is a combination of a strong world and equally strong characters. The worlds that the authors created in each of the above titles were creative and imaginative, and to be honest, I didn’t want to leave them. As fantastical as these amazing worlds were, they were grounded by a cast of unique, yet deeply flawed characters, which made me root for them, no matter how strange they claimed they were.

I think it’s no surprise to anyone that my favourite fantasy title, and possible absolute favourite book for the whole year, is Rachel Hartman’s Seraphina. Hartman’s writing was music to my ears; the words wove together an amazing and fantastical world filled dragons, who were strangely human-like. But of course, my favourite part of the story was Seraphina herself, whose struggle to accept herself as she was, warts and all, touched me. Captivating and highly imaginative, Seraphina is a treat for the eyes.

Everyone seems to be on the sci-fi/dystopian bandwagon for a few years now, especially after The Hunger Games. For me, nothing compares to the original trilogy, but the books I’ve included in this category don’t need to aspire to be like The Hunger Games. They are all fresh and inventive in their own way, depicting sometimes horrifying, sometimes fascinating futures. These books ask some tough questions about what it means to be human and what it means to live on this planet. These books aren’t love stories masquerading as dystopians, but instead are the real deal.

Picking the best in this category is kind of tough, but in the end, I have to go with Jessica Khoury’s debut Origin. Not part of a trilogy nor featuring a complicated love triangle, Origin got points right off the bat from me. Other than that, immortal Pia was a delight to read about; again, like so many of the heroines I read about this year, Pia was just so real in her desires and emotions and fears. Despite being raised in an isolated part of the Amazon jungle, Pia was still inquisitive and curious about the world around her, and I loved exploring her vivid world with her. One of my favourite sub-genres of YA is historical, since I’m a history buff. I love stories that take place in a long-ago time, with different rules and social conventions. In historical YA books, the setting itself usually adds a unique flavour to the society, and in some, it’s fleshed out so much that it even becomes an additional character. The best historical YA novels don’t just feature boy-girl problems, but an amazing heroine that breaks out of the traditional role of a girl, and takes the world by storm.

All of three above titles take place in another time, but the one I loved the most was Scarlet by A.C Gaughen. There was just something so real about Scarlet, as she struggled to be a woman, while dressing up as a boy in a world where women don’t have much power. Her bravery and tenaciousness made her a heroine to remember, and I’m excited to see where the next book in the series takes her.

I like to call this the year of the sequel. A lot of sequels were published this year, many of which were picked up stories from some of my favourite books from last year. Sequels are tricky things, in my opinion. In order to get at least 3 stars from me, the book needs to live up to the potential that it’s predecessor has built up. This is why sequels sometimes fall flat for me; after building up such an amazing story in the first one, sequels sometimes do little to move it forward to maintain the momentum.

Not all books are able to do this, and that’s why Alma Katsu’s The Reckoning really stands out in my mind. Not only does Katsu maintain the breakneck speed and momentum she introduced in The Taker, but she exceeds it! After introducing us to the horrifying, yet intriguing world of The Taker, Katsu went even further to delve into Adair’s character, which was probably my favourite part of the book. Riveting and haunting, I didn’t want to put The Reckoning down once I started it!

MOST ANTICIPATED, MOST DISAPPOINTED There were a lot of books this year that were overly hyped. Some because of the author, while others just because of their concept or story. Goodreads often helps to raise expectations unfairly, since members start adding and reviewing a book, sometimes even before it’s out, which raises expectations quite a bit. Sometimes these books live up, and even exceed, these expectations, but oftentimes, they don’t.

For me, the most disappointing book was Sophie Kinsella’s I’ve Got Your Number. After being a Kinsella fan for years, I was very eager to pick up a copy of her latest chick-lit. The plot didn’t sound all that amazing, but I knew that I was going to love it, regardless, so I went ahead and bought myself a copy. Boy, was I wrong! I still can’t pinpoint what went wrong with Kinsella’s latest novel, but it was just lacking the usual spark and humour that Kinsella usually writes with. She’s got another one coming out next year, and while I’ll definitely read it, I won’t be first in line.

Phew, that’s a lot of books! Lots of amazing books came out this year, and if this was the year of the sequel, next year will definitely be the year of the last book! (Does that even have a name…I don’t think so.) Either way, I can’t wait to get my hands on some of the highly anticipated titles of next year.

Thank you to all of you who have followed this blog over the past year; your support means a lot to me. 🙂